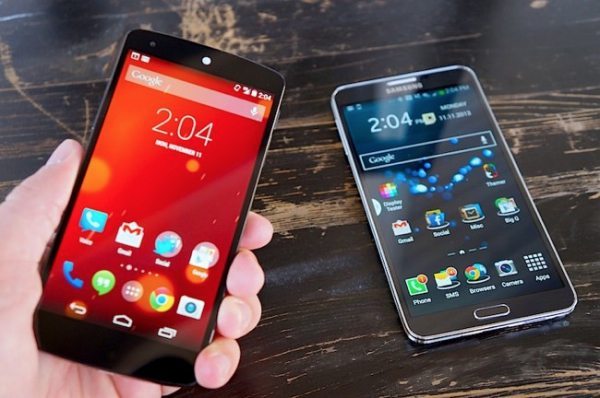 Some may just think this is a little odd comparing the Samsung Galaxy Note 3 and the LG Nexus 5, but apparently it makes perfect sense.

The Nexus 5 has already been compared with many other smartphones such as the Galaxy S4, LG G2, as well as the Moto X and the iPhone 5S. Comparing the LG N5 to these smartphones seems reasonable, but to put it up against the Galaxy Note 3 seems acceptable in the video shown below.

Pocket Now put the Galaxy Note 3 vs Nexus 5 video below together, and it gives a great insight of the side-by-side comparison.

The Nexus 5 quick specs includes a 5-inch display and the Note 3 is 5.7-inches but both have a full HD resolution of 1920 x 1080 pixels. They both house a Qualcomm Snapdragon 800 processor, and there is 1GB RAM difference between the two handsets.

Watch the video and see why it was worth doing Galaxy Note 3 vs Nexus 5 — What smartphone do you prefer?

Whilst on the Nexus 5 subject, we have come to learn that the 16GB Nexus 5 has now sold out in the US Google Play store, if you want the white 16GB model then you will have to wait about 2-3 weeks, the same shipping of 2 to 3 weeks is the same for the 32GB black model and the 32GB white will now ship on November 26.