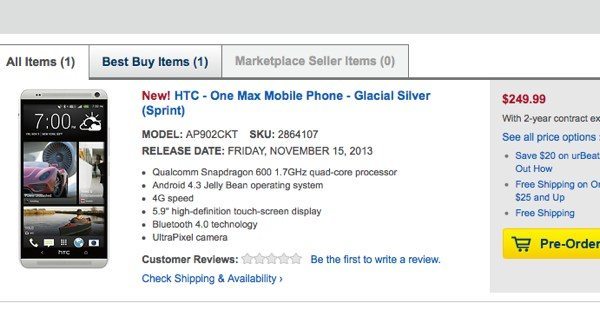 The HTC One Max Android smartphone is heading to the US in time for the holiday season, and we already know that it’s coming to Verizon, AT&T and Sprint. Now the HTC One Max Best Buy release date and price for Sprint has been revealed.

The One Max is a phablet-sized version of the popular HTC One flagship and recently we discussed the US launch of the Max as the Sprint version passed through the FCC. However, no release date had been available up until now.

Best Buy has now put up a product page for the Sprint HTC One Max showing availability as November 15. Although Sprint has not officially backed this up yet, its website does mention an initial software release for the One Max as arriving on November 15, which ties in rather nicely with Best Buy’s reveal.

The Best Buy appearance of the phone also lists an HTC One Max price of $249.99 on a two-year contract and it can be pre-ordered now. If this Best Buy information is accurate it looks as though the Sprint variant of the HTC One will beat both Verizon and AT&T to the starting line.

The HTC One Max is powered by a 1.7GHz quad-core processor, has a 5.9-inch Full HD display, 2GB of RAM and 16 or 32GB of internal storage (expandable via microSD to 64GB). It also features HTC’s UltraPixel camera.

It looks likely that the HTC One Max will appear on many gift lists this holiday season and we’d like to know if you’ve been waiting for it to arrive? What is it about the One Max that makes it more appealing to you than other phablets such as the Samsung Galaxy Note 3?