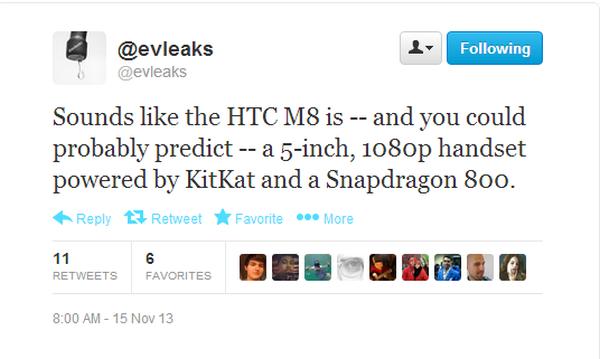 The smartphone world is constantly progressing with manufacturers looking at ways to tempt consumers to their products. This is often done by offering the buyer something different but if reports are accurate the HTC M8 specs may fail to wow some of the smartphone market.

When the HTC One was released towards the beginning of this year it offered something a little different from the rest of the Android market as it featured a premium build with specs to match. Now thoughts have been concentrating on its replacement that has been given the code name of HTC M8, but it is now being suggested that the device will offer a slight upgrade on this year’s model.

Often reliable evleaks has taken to Twitter and posted the comments that you can see on this page that the device will have a 5-inch Full HD display and powered by the Qualcomm Snapdragon 800 quad core processor.

Now in many people’s eyes this will be a nice upgrade on the previous model as it would mean we have a newer and more powerful processor coupled with a slightly larger display. Others though would point to the fact that many smartphones are already offering displays of this size using the same processor, and many new handsets released next year would take this further.

There is no doubting that the HTC One is a fantastic handset and if the company can build on this while providing something over its rivals besides the premium build it will again be onto a winner. We have heard recently that Samsung is supposedly going to offer a wraparound display next year that could possibly debut on the Galaxy Note 4, so this could raise the bar further.

Do you hope the HTC M8 has more to offer?