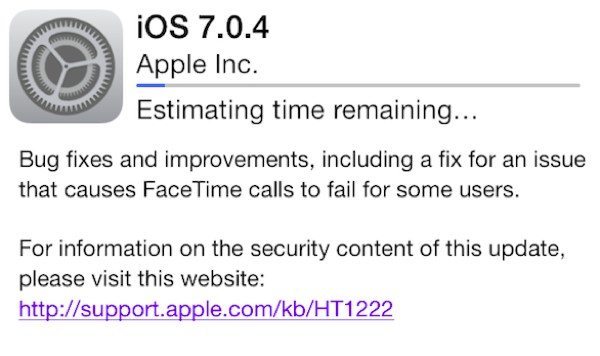 Apple released its new iOS 7.0.4 yesterday and downloading was a breeze, but for some it has not gone smoothly.

We visited the Apply Community to see how everyone is getting on, and after looking we have found that most talk about problems rather than letting everyone know how well it went.

We downloaded and then installed the iOS 7.0.4 update onto an iPhone 5S and had no problems at all, this time round it was done in the UK on the O2 network and all went smoothly.

Some of the problems found so far since installing iOS 7.0.4!

One iPad owner ‘HT6058 Verify update’ (iOS 7.0.4), but when they tried to download and install they had a system reply saying that there were not connected to the Internet so please try again. This is strange because they said they were on the Internet because they left the message in the Apple Community. Their ending message was – iPad Air + iTunes = unworkable system!

It seems lack of Internet connection is an ongoing occurrence as we have seen a few other members having the same problem.

Another issues seems to be iPhones being left slow and sluggish since the install, some have said this is also bad they want to go back to 7.0.3. This seems to be happening on multiple iPhone models.