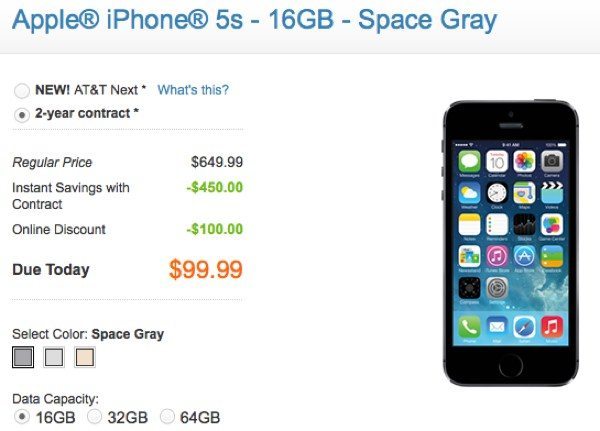 If you’re in the US and just about to purchase a new smartphone then you might want to check out some AT&T sale prices for various devices first. AT&T has slashed the iPhone 5S price as well as prices for the Nokia Lumia 1520 phablet, Samsung Galaxy S4 and more.

These price cuts are available for AT&T online orders and offer a great incentive for purchasing some of the best smartphones available on the carrier. The iPhone 5S is now available on AT&T for just $99 for the 16GB version on contract. That will save you a massive $100 off the price from Apple right now.

However, if your fancy is the 32 or 64GB models then those remain at the same usual prices of $299 and $399 on contract respectively. You might prefer to pay less and get your hands on the iPhone 5C, which is also subject to a price cut.

The Nokia Lumia 1520 phablet was already announced with a $199 contract price for AT&T. However, even before it has released on the carrier AT&T is now taking pre-orders for the tablet with a contract price of only $99. The Lumia 1520 releases on AT&T on November 19, so that’s just two days away.

Those hoping to get the Samsung Galaxy Note 3 at a knock down price from AT&T will be disappointed though, as that’s one of the phones not on sale. The Galaxy Note 3 is still selling at $299 with a contract, making the price of the Lumia 1520 even more attractive.

All of these deals are available for online orders right now and come with free shipping, so it’s worth checking out more or ordering from AT&T here. These deals are for a limited time only while stocks last and all require new 2-year contracts.

Are you going to take advantage of the AT&T sale prices for one of these smartphones? Will your choice be the iPhone 5S, Nokia Lumia 1520 or which other device? Let us know with your comments.