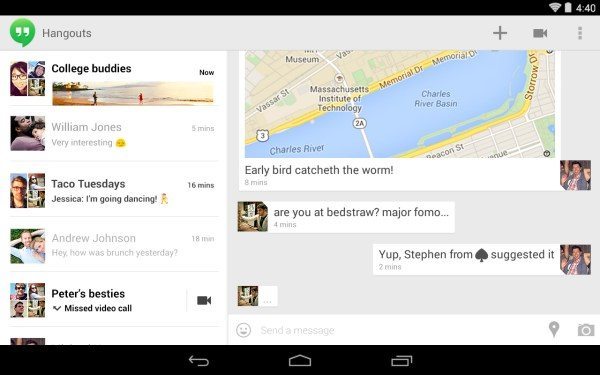 A Google Hangouts Android app update has just arrived bringing several enhancements and fixes for some issues. The latest update is version 2.0.2 and some Hangout users will be especially pleased to see MMS fixes.

The Google Hangouts Android app enables users to have one-on-one and group conversations with emoji, photos and free video calls. Users can connect with their contacts across Apple and Android devices.

Previously Google added SMS/MMS integration to the Hangouts app and also replaced the default SMS application in Android 4.4 KitKat and the Nexus 5 phone with this. However, users found that when they send an SMS to multiple recipients it would be turned into an MMS, which is more expensive.

This issue was made worse by the fact that users could not disable it but the latest update now means that users can turn off group messaging (MMS) in Settings to send SMS to multiple people. Fixes have also arrived for issues with MMS sending and receiving.

If you want to see more or download the Google Hangouts Android app, head to this Google Play page. The app is free and is compatible with devices running Android 2.3 or later.

Are you pleased to see the Google Hangouts app for Android receive this update? Had you been affected by the recent issues that have now been fixed? Let us know with your comments.