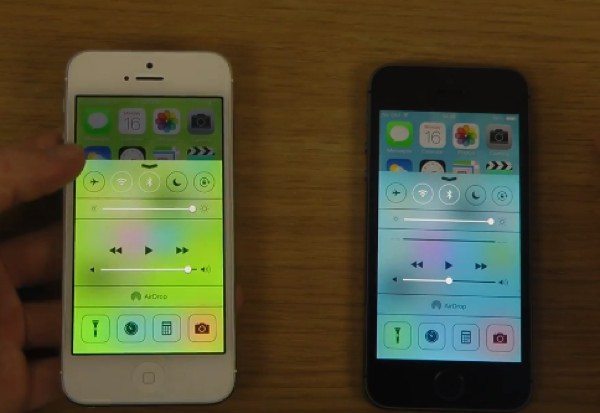 Just a few days ago iOS 7.1 beta 2 was made available for developers, a sure sign that a public release is getting nearer. The current version of Apple’s mobile operating platform is iOS 7.0.4 and today we have a video to share with readers that shows iOS 7.1 beta 2 vs. iOS 7.0.4.

Some iOS device users have met with problems stemming from iOS 7.0.4 and many are eagerly waiting to update to iOS 7.1. The arrival of iOS 7.1 beta 2 no doubt pleased plenty of device users then, although news followed that this has been blocked to non-developers.

Developers are making good use of iOS 7.1 beta 2 though and the comparison video below shows the iPhone 5 (in white) running this upcoming version of the operating system against an iPhone 5S (in black) with the current iOS 7.0.4. It illustrates some of the differences and new features with the newer iOS.

The 7-minute YouTube video begins with showing an immediate difference with the addition of Passcode under Settings, a shorter way of accessing this function than with iOS 7.0.4. Another difference depicted is with the Calendar as a list view is now available and a Button Shapes option is also shown.

The video goes on to look at various other aspects, for instance showing snappier speed on animation with iOS 7.1 beta 2, bounce animation when bringing up the Control Center and much more. We’ll let you check out the video below to see all the changes for yourselves.

The video gives a useful look at changes and new iOS 7.1 features that are on the way when it’s made available for the public, and at the moment this looks likely to be sometime in January. When we hear more about the iOS 7.1 release we’ll be sure to let you know.

Are you looking forward to the changes and improvements that iOS 7.1 will bring? Let us know with your comments.