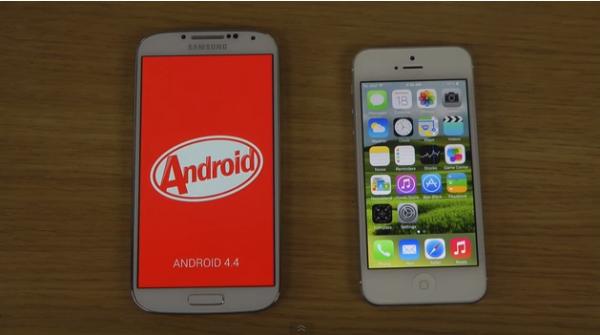 There are a number of flagship smartphones due to get an upgrade to some new software in the coming weeks, and today we have the Samsung Galaxy S4 4.4 KitKat vs. iPhone 5 iOS 7.1 Beta 2 in an Internet speed test.

Apple recently released the second beta for iOS 7.1 to developers for testing ahead of a public release expected next month, while the Galaxy S4 is still sitting on Android 4.3 Jelly Bean unless you have installed a custom ROM or own the Google Play Edition of the handset.

The video we have for you today at the bottom of this page is comparing the iPhone 5 with the iOS 7.1 beta 2 with the Galaxy S4 running the Android 4.4 CyanogenMod 11 custom ROM. The user begins by making sure that both handsets are connected to the same 5G router before loading up a speed test app.

First up the test is run on the iPhone 5 which achieves almost 18Mbps download speed and 37.01Mbps upload speed, before we then turn to the Galaxy S4 which returns a massive score of 85.85Mps and an upload speed of 39.72Mps.

The speed test is run another two times on each of the handsets with results on both handsets gaining higher scores, but the iPhone 5 seems to struggle more in terms of download speeds. Check out the full video and tell what you think of the results.