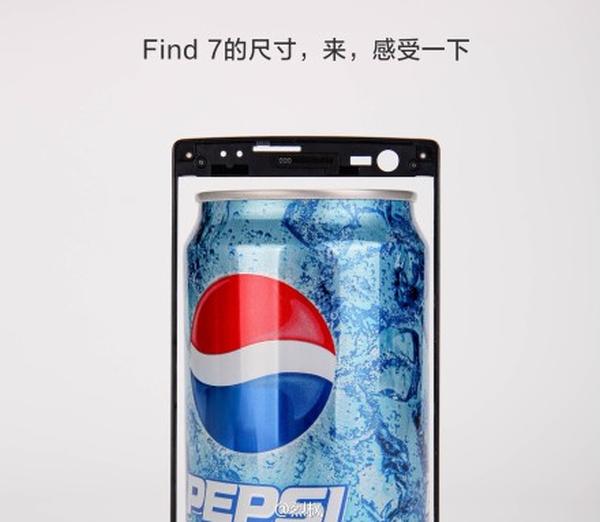 Chinese smartphone manufacturer Oppo has been busy recently teasing consumers about the upcoming launch of its latest flagship smartphone device, and now the Oppo Find 7 release nears with a new image and some more spec details.

We have been hearing more details about the upcoming launch of the Oppo Find 7 recently which have included the specifications revealed by the company that most recently included a display sized at 5.5-inches with a resolution of 2560 x 1440.

Now some more images have appeared via Chinese website Weibo that appear to be showing the front panel of the Oppo Find 7, which show the component alongside a Pepsi can and a 100 Yuan note that is being done for comparison purposes.

The display looks to have narrower bezels than the Oppo Find 5 that the device is replacing, and it also has space for a large front facing camera along with a number of sensors. It is also being speculated that the device will use either the quad core Qualcomm Snapdragon 800 or Snapdragon 805 processor depending how quickly the company wants to launch the device.

This processor will be used alongside 3GB of RAM and the Oppo 7 if priced correctly outside its homeland could give consumers something to think about away from the likes of Samsung and HTC for 2014.

Will you consider the Oppo 7 when it’s released?