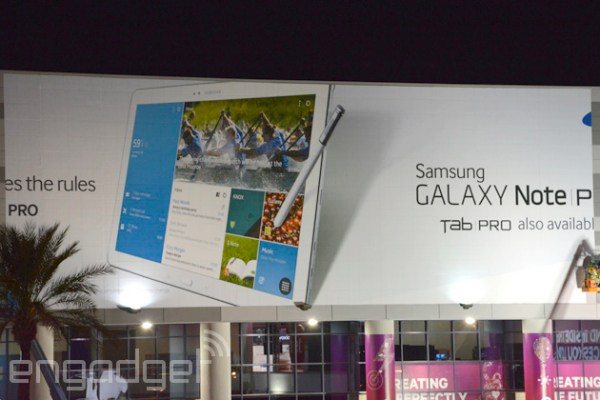 There have been plenty of leaks lately about upcoming Samsung Galaxy Pro tablets. Now, as if to remove any remaining doubt the Samsung Galaxy Note Pro and Tab Pro have been revealed by a banner unfurled at CES. The event officially kicks off tomorrow and it won’t be too much longer until these tablets are made official.

Ahead of the official unveiling some of the snippets we’ve heard so far about the Samsung Galaxy Note Pro include a 2.26GHz Qualcomm Snapdragon 800 quad-core processor (the same as with the Galaxy Note 10.1 2014 tablet), Adreno 330 graphics, and a 12.2-inch display with resolution of 2560 x 1600.

The Galaxy Note Pro is also thought to have 3GB of RAM, 32GB of internal storage, an 8-megapixel rear camera and 2.1-megapixel front-facing shooter. It will run the Android 4.4.2 KitKat operating system with a possible TouchWiz refresh and feature a stylus pen.

On the other hand we have the Samsung Galaxy Tab Pro and indicators are that this will be available in an 8.4-inch version as well as a 10.1-inch model. The Galaxy Tab Pro (see concept design here) is thought to have 16GB of internal storage and both sizes are likely to feature Super AMOLED displays.

It’s possible that we could see the official debuts of these new Samsung Galaxy Pro tablets later today at CES. Thanks to the banner teasing at the South Hall of the Las Vegas Convention Center, we certainly know that they will be introduced very soon indeed even if its not today.