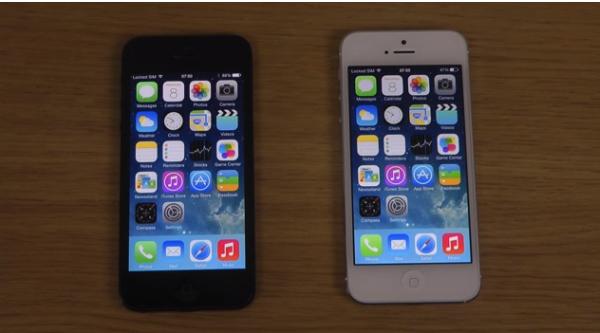 The way new software can affect our mobile devices can have a big impact on the enjoyment that we experience when using our smartphones or tablet PCs, but luckily manufacturers are constantly looking at ways to improve things. Today we have an iPhone 5 iOS 7 beta 3 vs. iPhone 5 iOS 7.0.4 in a speed test video.

Only yesterday we told you about Apple releasing a new iOS 7.1 beta to developers and provided all the changes it brings to iOS hardware, and we have also seen some of these demonstrated in a video. Today we have another video for your viewing pleasure that is looking at the new software on an iPhone 5 against the last iOS public release on another iPhone 5 to see which is quicker.

The video is only a short one with the black iPhone 5 running the latest iOS 7.1 beta 3, and the white model on iOS 7.0.4, and the video gets underway by the reviewer shutting down both handsets at the same time.

They both shut down around the same time with the beta 3 running model seemingly closing down slightly quicker than the other device. On powering up both handsets display the Apple logo at the same time, and the black iPhone 5 just beats the device running iOS 7.0.4, but the reviewer keeps saying iPhone 5S even though he has an iPhone 5 in his hand.

Are you looking forward to the public release of iOS 7.1?