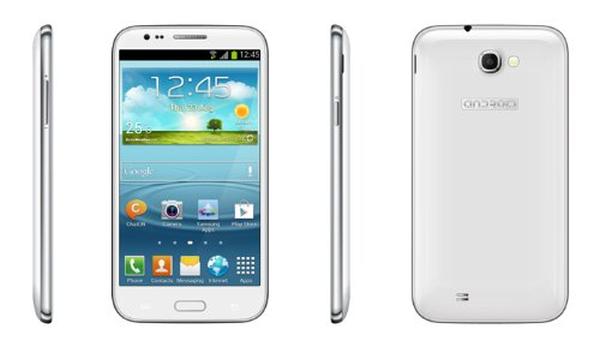 There is nothing unusual when seeing many different products from leading brands copied in some way or another and these often originate out of China and can be a poor imitation of the real thing. This is a problem with a variety of different products and has long plagued the smartphone market as well, and the Samsung Galaxy Note 2 lookalike on Amazon could mislead some people.

While browsing through a couple of online retailers today I stumbled across the handset that you can see on this page on Amazon, which goes under the name of “ New Quad Core 5.5 Note II”. Obviously to many people this can easily be spotted as a Samsung Galaxy Note 2 knock off, but to the unsuspecting it may come as a nasty surprise if they think they are getting a bargain handset in a sale.

This device comes from China and while it may have the same sized 5.5-inch touchscreen display as the real Galaxy Note 2, this one only has a resolution of 540 x 960. The device does have a quad core processor under the hood though in the form of a MediaTek MTK 6589 clocked at 1.2GHz, and coupled with 1GB of RAM.

The device is running on Android 4.1 Jelly Bean but only has 4GB of on board storage which can be only expanded by another 4GB, while cameras come in at 8MP on the back with a 1.3MP around the front.

There is also dual SIM support and for Â£99.99 the device isn’t bad but reading through some of the reviews gives a mixed reaction to the device with many questioning the build quality, and some have even said the display has a design flaw.

Are you surprised Amazon sells this handset?