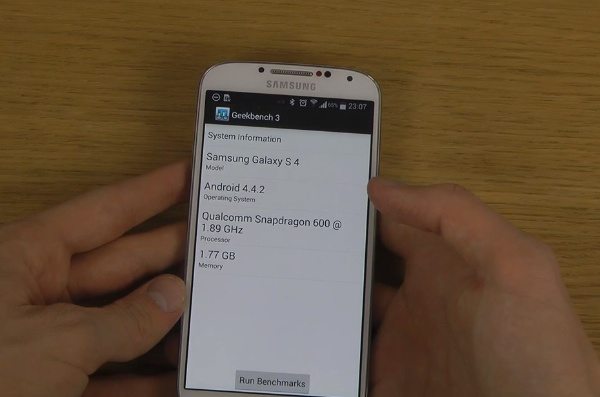 As often happens some people have chosen to install the test build of Android 4.4.2 for the Galaxy S4 rather than wait for the official update. This gives us a chance to get a look at what it offers and a nice taster.

The first YouTube video that we’ve embedded for you to view below this article shows a preview of the Samsung Galaxy S4 with the Android 4.4.2 KitKat update. The video points out many of the changes and improvements that you can expect when the official update arrives and runs through some of the new additions.

The second YouTube video below shows a benchmark test of the Samsung Galaxy S4 running Android 4.4.2. As with the first video the reviewer refers to it as the official Android 4.4.2 KitKat update, although it is in fact the test build and there may still be some changes by the time it officially releases.

The Geekbench 3 benchmark test is shown being conducted and the resulting scores shown. Some of you might want to compare this with the results of the same test on your Galaxy S4 without the KitKat update. The videos give an insight into Android 4.4.2 KitKat on the Galaxy S4 and as soon as we hear more about the official update’s arrival for the phone we’ll be sure to pass on that news.

After seeing the changes for the Samsung Galaxy S4 with Android 4.4 are you looking forward to receiving the official update?

One thought on “Samsung Galaxy S4 Android 4.4 preview and benchmark”