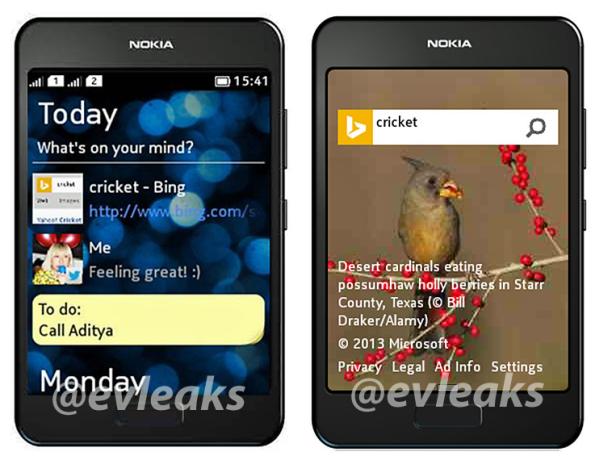 While Nokia now has some great high end specification smartphones, its budget offerings have always been the company’s bread and butter though proving hugely popular in emerging markets. Today a device that could be a redesigned Nokia Asha 504 appears with dual SIM support.

While we have been hearing and seeing many leaks of the Android running Nokia Normandy recently this device has a different design, and has been leaked by serial tipster’s evleaks. The image that you can see on this page was accompanied by the caption “What Is This Thing? dual SIM edition”.

The press render looks slightly different from the other Nokia Asha handsets currently available as it has thinner bezels, and some have suggested it is in fact a tablet PC device, which has been shot down by many other comments on the Twitter page.

This has led to some to think that the device is an upcoming Nokia Asha 504 with the handset featuring a screen size around the 3.5-inch mark. The render shows a home button that would be more at home on Samsung mobile devices, and that Bing is the default search engine.

There is not much else to currently go on but the device could make an official appearance later this month at the Mobile World Congress taking place in Barcelona, Spain. It could also make an appearance alongside the handset that has the codename of Nokia Normandy that is believed to come with a special version of the Android 4.4 KitKat operating system.