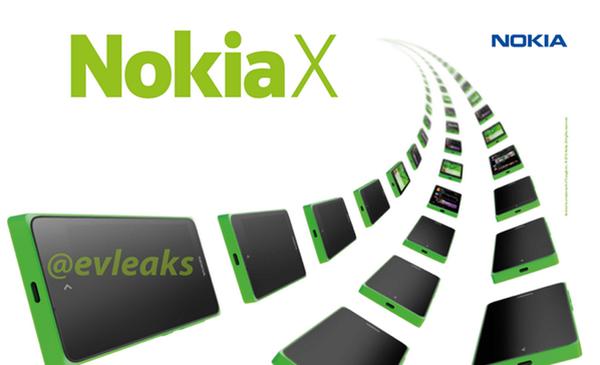 It looks almost certain now that Finnish smartphone manufacturer Nokia will be releasing at least one handset that is based on the Android operating system. Now the Nokia X has been seen again ahead of any official launch by the company.

The image you can see on this page is the latest leak of the Nokia X from serial tipster’s evleaks, and as you can see is another press render of the upcoming handset. Again the device has a green colour scheme with the device expected to come in a number of colour choices.

This comes after the news that we brought you yesterday that were claiming that the device has already been sent out to developers in India and other areas as the company looks to get the top apps from Android and iOS ported over to the special Nokia App Store for the handset.

The device has been tipped to feature a 4-inch WVGA touchscreen display that is powered by a dual core Snapdragon processor clocked at 1GHz. There is also supposedly 512MB of RAM along with 4GB of internal storage, 5-megapixel rear facing camera, and a 1,500 mAh battery supplying the juice.

It is expected to cost around the Rs. 6500 mark when it releases in India with the device expected to be unveiled at the Mobile World Congress 2014 event starting next week.

One thought on “Nokia X seen again ahead of official launch”