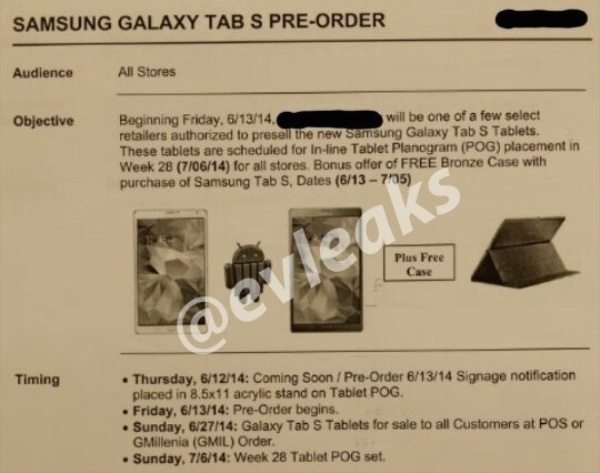 Early last month we saw the first indications of new AMOLED tablets from Samsung dubbed the Galaxy Tab S line. These will come in two sizes and they are expected to be made official at an event on June 12th, although we had no news on when exactly they would be available. Now a Samsung Galaxy Tab S 8.4 and 10.5 release date has been claimed.

A timetable that is said to be from an anonymous US retailer has been leaked, and it says that pre-orders for the tablets will start on June 13th with the tablets becoming available on June 27th. While we cannot verify this information it does come from a very reliable source, and if accurate it means that we won’t even have to wait until the end of the month.

We’ve already seen some specs affirmation from a benchmark spot and also purported press renders for the new Galaxy Tab S tablets, and it’s looking as though these will be top-notch devices with specs to match and featuring fingerprint sensors. Are you lining up the 8.4 or 10.5-inch Samsung Galaxy Tab S as your next tablet purchase?