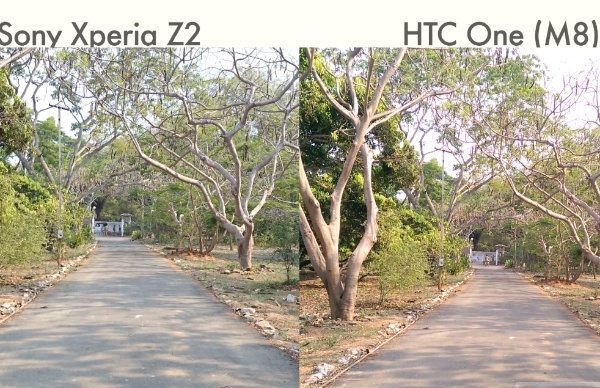 The Sony Xperia Z2 and HTC One M8 are both impressive top-flight flagship Android smartphones, and many potential buyers may be trying to choose between them. If smartphone photography is important to you then you may be interested in today’s look at the Sony Xperia Z2 vs. HTC One M8 and how the camera performances compare.

We’ve already shared a full video comparison of these two phones as well as comparing the speakers and giving a specs rundown of them, so feel free to check out any of those at the links provided. Below our story today we’ve placed a YouTube video from Fone Arena for your viewing pleasure.

The video strictly concerns itself with showing how the camera results of the Xperia Z2 and HTC One M8 stand up against each other. After a brief introduction you’ll see image samples taken in various settings and conditions with both cameras, shown alongside each other for easy comparison. There are also some images shown that were taken with the Canon EOS 5D Mark III camera for reference.

In the last part of the video you’ll see some video footage taken with both phones, also shown alongside each other. You may also be interested in a low-light shootout between these two phones and the Samsung Galaxy S5.

People often have very different views about smartphone camera results and we don’t want to sway your opinions. After you’ve checked out the video below we’d be interested to hear which phone’s camera you think gives the best performance, the Sony Xperia Z2 or the HTC One M8?