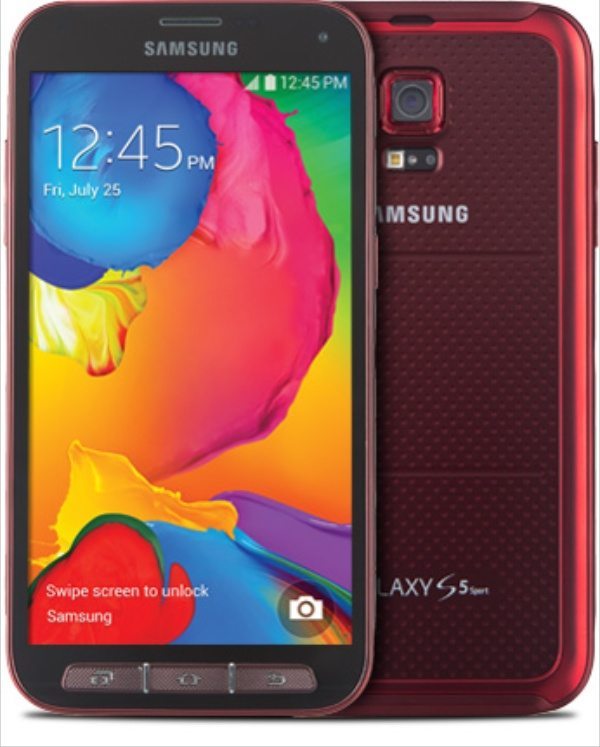 Our initial impressions are that the S5 Sport appears to be a cross between the Galaxy S5 that is widely available and the S5 Active offered by AT&T. The build of the phone looks to be more rugged than the body of the S5 (although not quite so much as the S5 Active), and features a rear cover with a new design. The Galaxy S5 Sport also features physical Android buttons as the S5 Active does.

The S5 Sport has IP67 certification for dust and water resistance, but not the military grade certification that appears for the S5 Active. Galaxy S5 Sport specs match those of the standard S5 so you’ll get a 2.5GHz Snapdragon 801 quad-core processor, a 5.1-inch Super AMOLED Full HD display, 2GB of RAM, a 16-megapixel rear camera and 2-megapixel front-facing camera.

The Galaxy S5 Sport also has support for 4G LTE (including Sprint Spark), Wi-Fi 802.11 ac, Bluetooth 4.0 and NFC, as well as a 2800 mAh battery and heart rate monitor. The internal storage for the S5 Sport is 16GB (expandable via microSD), and it runs the Android 4.4.2 KitKat operating system. It’s measurements are slightly larger than that of the standard Galaxy S5, at 144mm x 74mm x 8.9mm, and it weighs in at 158g.

The phone will be available from July 25 on Sprint and it comes in Electric Blue or Cherry Red color options. You can register an interest on this Sprint page for the phone. As for the price of the S5 Sport, on the Sprint Easy Pay scheme you can get it for nothing upfront and then $27.09 monthly payments for 24 months. For a limited time those purchasing the Galaxy S5 Sport from July 25 can get a price reduction of $50 off the Gear Fit.

The phone’s launch on Sprint is part of the Fit Live mobile health and fitness initiative and this brings a free year of MapMyFitness MVP as well as a Spotify Premium bonus. You can find out more at the source below. Are you considering purchasing the Samsung Galaxy S5 Sport for Sprint?