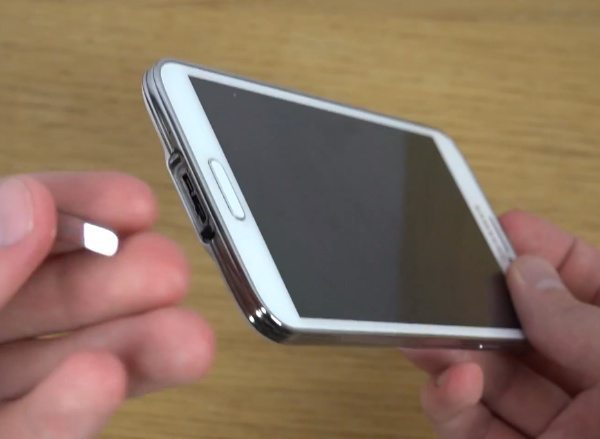 One of the most dominant smartphones at the moment is the Samsung Galaxy S5, an Android flagship device that has won high praise and a lot of fans. It has been available now for a couple of months and sometimes any issues with a device aren’t noticed straight away. Now a Samsung Galaxy S5 build quality problem has been reported.

Someone who is actually a phone reviewer, who felt prompted to issue a warning about the Galaxy S5 via a YouTube video, has noted this matter. We’ve embedded this below our story so that you can see it for yourselves. It comes from phone reviewer Adrianisen, whose videos we sometimes feature on this site, so it’s worth paying some attention to.

Part of his Galaxy S5 is actually damaged as one of the flaps at the bottom of the handset has broken off, and you can see this clearly shown. We don’t know whether this is a problem that many owners of the phone have encountered, and Adrianisen fairly notes that as a phone reviewer he may not be quite so careful with his device as other users.

However, he does stress that the phone wasn’t dropped and the flap was simply opened in the usual way. As the phone is only just over two months old we wouldn’t expect parts to be breaking away, although these pieces of plastic do look pretty flimsy. As a result of this damage the device is no longer waterproof.

To make it clear it’s stressed on the video that not everybody is likely to encounter this kind of damage with the Galaxy S5, it’s just something that you might want to take into account. However, we do note that in the comments below the video description there are some other users saying that this has also happened to their device.

We’d really like to get an idea of how widespread this problem is so if you have the Samsung Galaxy S5 we’d like to hear from you. Has your device remained in perfect condition or have you too experienced this breakage problem, or indeed any other issue? Let us know by sending us your comments.