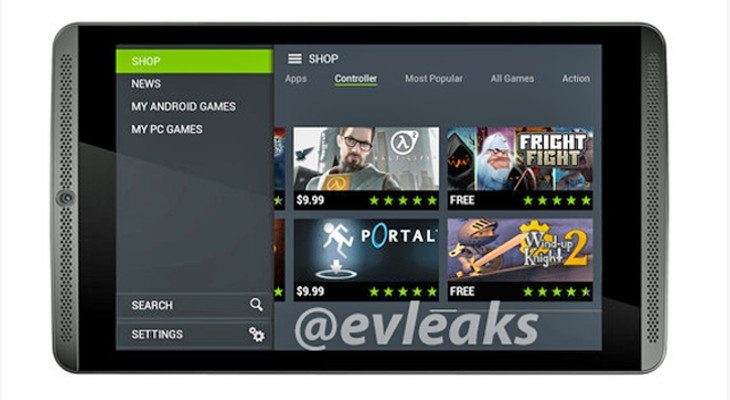 Rumors of a Nvidia Shield 2 have been circulating around the web since the first of the year, and in April a device believed to be the Shield 2 showed up on the benchmark site AnTuTu. Another piece of the puzzle was revealed earlier today when a leaked photo of a new Nvidia device surfaced on the web.

Leaker extraordinaire, @evleaks, dropped a photo of a device believed to be the Nvidia Shield tablet this morning, and all we can say is… wow. You can clearly see front-facing stereo speakers on the along with a camera, and it’s most certainly a looker. As you’d expect, it supports the Tegra Zone, and you can see that it will handle PC streaming via the “My PC Games” tab.

In terms of the specs, the Nvidia Shield tablet is thought to rock the Tegra K1 processor, and have 2GB of RAM with the standard 16GB of storage. Those are the rumored specs, but with the K1 under the hood, we would like to see at least 3GB of RAM, 32GB of storage and at least an FHD display. Those specs aren’t that far-fetched either considering one of the main draws of the tablet will be its ability to stream PC games.

We expected another handheld from Nvidia, but it’s safe to say nobody is going to be disappointed with the tablet that showed up today. There has been no word on when we might see the sleek slate, but we’re hoping its sooner than later.