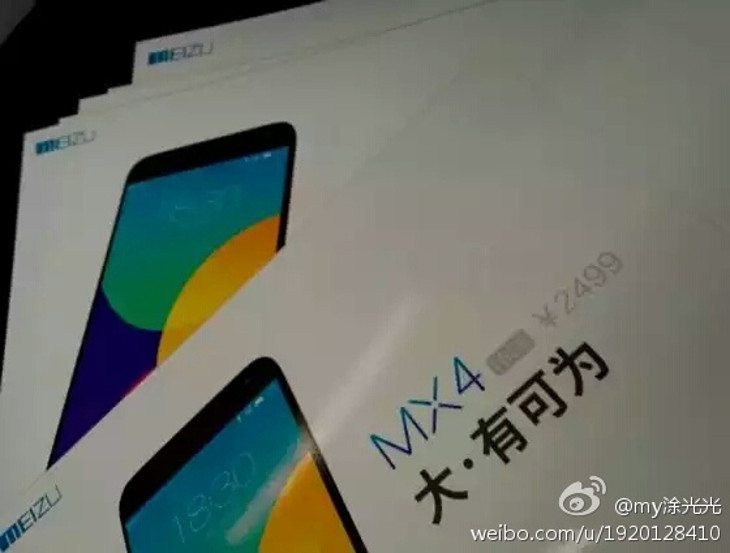 The Meizu MX4 is expected to arrive soon, and the company may have just given us the date through through Weibo. August 18th is the date, and we can only assume it means the release of the MX4 is imminent along with Flyme 4.0.

The Meizu MX4 may be on the way, but we’re still not sure exactly what to expect as things tend to change, and there are always variants these days. Luckily, some photos have surfaced that show marketing materials of some sort for the handset.

The leaked material shows the Meizu MX4 will have a 20.7MP rear camera, and it’s going to be a good one — the same IMX147 that’s found in the Xperia Z2. No other specs were listed, but the company’s new Flyme 4.0 skin will come along for the ride, and the Meizu MX4 price is listed as 2,499 Yuan/$406.

Last week, we talked about some of the rumored Meizu MX4 specs which included a 5-inch screen, Snapdragon 805, and 3GB of RAM… on the regular version. There is supposed to be a “Pro” model of sorts with a QHD display as well, and a fingerprint scanner is also thought to be onboard.

We’re interested to see exactly what Meizu will unveil, as they’re not waiting for IFA 2014 if the August 18th release date is for the MX4 and not just to show off Flyme 4.0. We’ll find out soon enough.

Are you a fan of Meizu’s handsets?