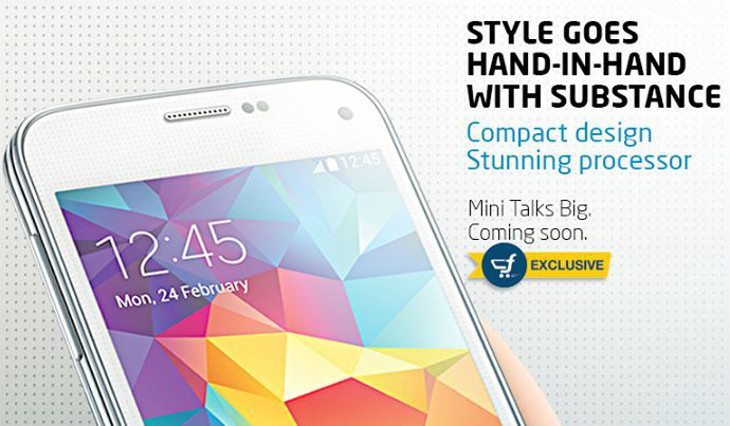 The e-tailer known as Flipkart has snagged their fair share of exclusives and they’ve just announced a big one with Samsung. We knew the Samsung Galaxy S5 mini would eventually arrive in India, and now we know it’s coming as a Flipkart exclusive.

The Samsung Galaxy S5 mini showed up on the Samsung India site earlier in the month as a dual-SIM variant. According to a new Facebook post from Flipkart, the device is “Coming Soon” and its listed as a Flipkart exclusive.

Assuming the Galaxy S5 mini is the same one listed on Sammy’s site, you’re looking at a 4.5-inch Super AMOLED 720p display with 1.5GB of RAM and a 1.4GHz quad-core SoC under the hood. You can expect 16GB of expandable storage, a 2100mAh battery and a dual camera combo of 8MP/2.1MP. It’s not a 4G handset, but you will get NFC, Bluetooth, Wi-Fi and 3G.

If you’re thinking the Samsung Galaxy S5 mini is just another mid-ranger, you might be surprised to find it carries the IP67 tag which means it’s water and dust resistant. It also has the heart-rate monitor and fingerprint scanner found on the Galaxy S5.

The Galaxy S5 mini coming to Flipkart is a big move for the retailer as it could be the first of many Samsung variants that arrive in their shop. We haven’t heard a release date or price yet, but we expect Flipkart will make an announcement soon.

Are you interested in the Samsung Galaxy S5 mini?