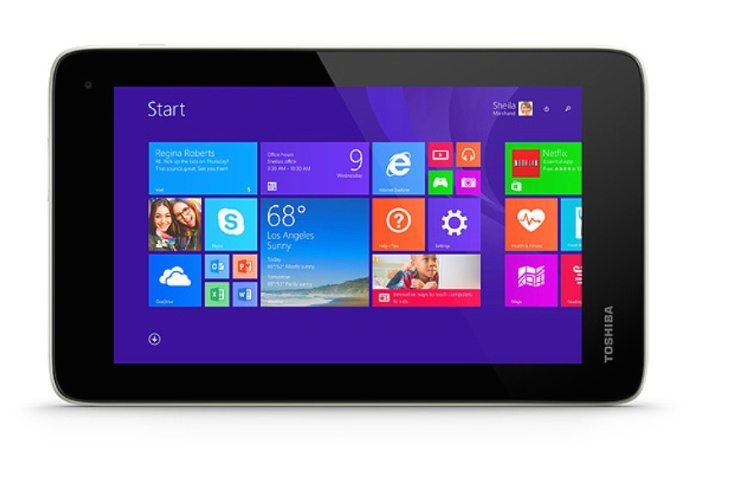 There’s plenty going on the mobile world at the moment and Toshiba has just announced a new affordable tablet. The Toshiba Encore Mini budget Windows 8.1 has been launched and will release soon. We have details of the specs and price ahead.

The Toshiba Encore mini with model number WT7-C16 is powered by an Intel Atom Z3735G quad-core processor, and has a 7-inch display with resolution of 1024 x 600,16:9 aspect ration, and 5-finger capacitive touch sensor. It has 1GB of RAM, and 16GB of internal storage that’s expandable via microSD to 128GB.

This tablet runs Windows 8.1 and has a 2-megapixel rear camera with a VGA front-facing snapper and microphone, as well as a 13Wh battery said to last for over 7 hours of usage. Other inclusions are a microUSB 2.0 port and the tablet comes with a microUSB to full-size USB cable for peripherals and storage. There’s no HDMI port or docking connector though.

Wi-Fi 802.11 b/g/n and Bluetooth 4.0 also feature, and the phone is in a Winter White color and weighs 354g. You can order it from Toshiba online here, where it’s priced at just $119.99. You’ll see that the company says that shipping will be from September 17th, so there are just a couple more weeks to wait.

While the specs may be nothing to sing about, the tablet is well priced and could be something to think about, especially as it arrives in the run up to the holiday season. Would you consider purchasing the Toshiba Encore mini tablet, and what are your thoughts on the pricing? Let us know with your comments.