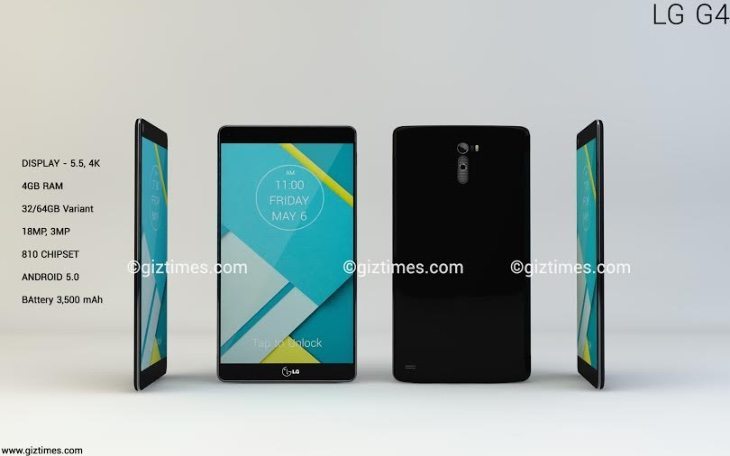 Many people are fans of LG’s flagship line with the G3 being the latest rendition. It can be interesting to look ahead though at prospects for the future, and of course that means the LG G4 that will release next year. Today we have a new LG G4 design to show that also includes some imagined specs.

This isn’t the first LG G4 concept idea we’ve featured (see examples here and here) and we’re pretty sure we’ll see plenty more before the phone releases. However, this one certainly gives food for thought as it looks extremely slim but is oddly wide with what looks to be metal edging, and we wonder what readers think about this styling?

Specs of this LG G4 are based on expectations of Giz Times who also came up with this render. They include a Snapdragon 810 64-bit quad-core processor, a 5.5-inch 4K display, 4GB of RAM, and 32 or 64GB models of internal storage likely to be expandable to 128GB. It has an 18-megapixel rear camera with optical image stabilization and a 3-megapixel front-facing snapper, and the camera area on the reverse looks smaller and more sophisticated.

This LG G4 idea runs the Android 5.0 Lollipop operating system skinned with a new LG UI, and has a 3500 mAh battery. It also has some tasty features in the way of front-facing stereo speakers, Dolby acoustics, a fingerprint sensor, wireless charging, and active noise cancellation with dedicated mic.

Going by the release date of the LG G3 we don’t expect the LG G4 to launch until late spring or early summer next year, and of course at present none of us know what it will look like. However, if it is unveiled looking much like this design would you be pleased or not? Tell us what’s on your wish list for the LG G4?