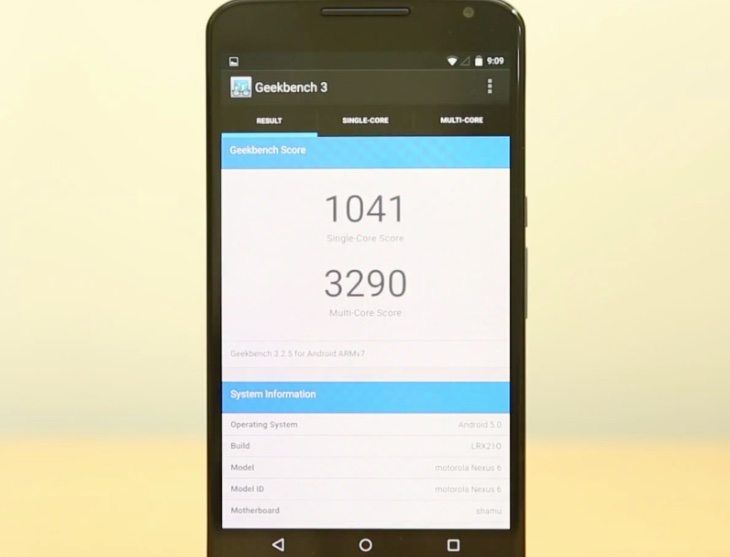 The new Google Nexus handset is always one of the most anticipated arrivals of the year, and the Motorola-made Nexus 6 recently released. This is a whopper of a handset with top-end specs and a price to match, and as a Nexus device it benefits from a stock Android experience as well as speedy future OS updates. If you’re still pondering whether to purchase this phone, you may be interested in Nexus 6 benchmark tests and the results compared with some other handsets.

The Google Nexus 6 is powered by a 2.7GHz Snapdragon 805 quad-core processor with Adreno 420 graphics and 3GB of RAM, so should be equipped to perform excellently in benchmarking. If you want to read much more about it including reviews, comparisons with phones such as the Samsung Galaxy Note 4, iPhone 6 and more, you can do so in our previous articles linked to here.

Now onto the benchmarks and below this article we’ve embedded a YouTube video from Fone Arena that shows a gamut of benchmark tests being conducted on the Nexus 6. The tests involved are AnTuTu 5, Vellamo, Geekbench 3, Nenamark 2, GFXBench, Basemark X, 3DMark Ice Storm Unlimited, and Basemark OS II.

After each test is performed you’ll then see the resulting scores for the Nexus 6, and then that score compared with many other smartphones on the market. Just a few of those included are the iPhone 6 Plus, Samsung Galaxy S5, Huawei Ascend Mate 7, Xiaomi Mi4, Moto X (2014), HTC One M8, and LG G3, (phones compared vary by test).

We’re not going to give away all of the benchmark results here as it might spoil your enjoyment of the video below. However, we will say that the Nexus 6 did really well in some of the tests, although in others we were a little surprised at its placing compared to others.

When you’ve checked out the benchmark video we’d appreciate your thoughts on how the Google Nexus 6 performed in these tests. Why not drop us a comment using the box below.