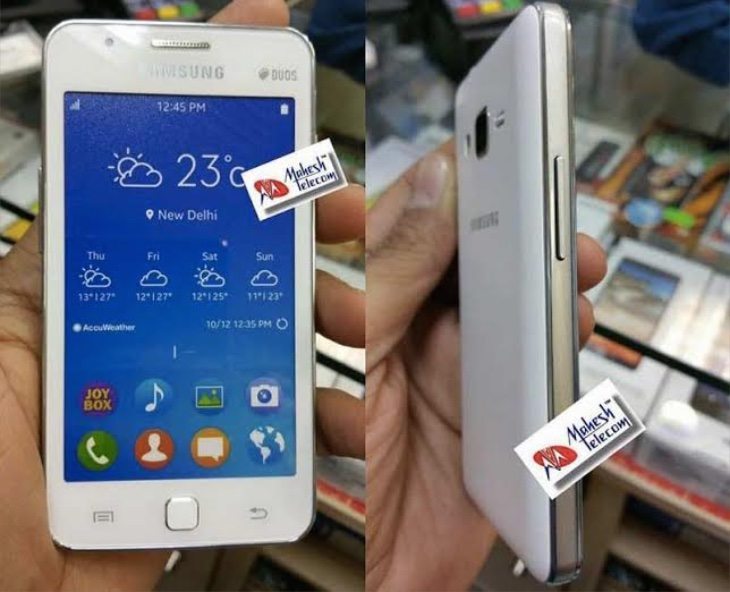 In December there was news that the Samsung Z1 smartphone could be launching in India on January 18th. This is the first budget Tizen OS phone from the company, so as you can imagine there’s a lot of interest piled up for this device. It now looks as though the phone could release earlier than expected, as the Samsung Z1 India price and availability has been tipped.

There have previously been some leaks for the Z1, and it’s set to be a compact size with a display of just 4-inches. Now Mahesh Telecom states that the phone could be available for sale as early as tomorrow, and also gives a price of Rs. 5,700 (MOP). Idea of availability soon is backed up by BGR India, who say that they have been invited to a Samsung launch event tomorrow, and it’s anticipated that this is for the Samsung Z1.

Specs of the Samsung Z1 (Z130H) include a 1.2GHz Spreadtrum SC7727S dual-core processor, Mali-400 graphics, a 4-inch display with resolution of 800 x 480, 768MB of RAM, and 4GB of internal storage (expandable via microSD). It has a 3-megapixel fixed-focus rear camera and LED flash, a VGA front-facing camera, and a 1500 mAh battery, and it will be running the Tizen 2.3 operating system.

The Z1 will feature Tizen Store for with apps including WhatsApp available. The dual SIM phone’s measurements are thought to be 120.4mm x 63.2mm x 9.7mm, and it will weigh in at just 112g. Connectivity should include support for 3G, WiFi 802.11 b/g/n, Bluetooth, and A-GPS.

It’s also reported that the low-end Samsung Galaxy J1 that we gave readers some details of yesterday could be launched at the same event. However, as this will be an Android handset that doesn’t seem so likely to us.

Are you hoping to see the Samsung Z1 smartphone arrive for sale tomorrow? What makes you want to try out a Tizen OS device? Let us know with your comments.