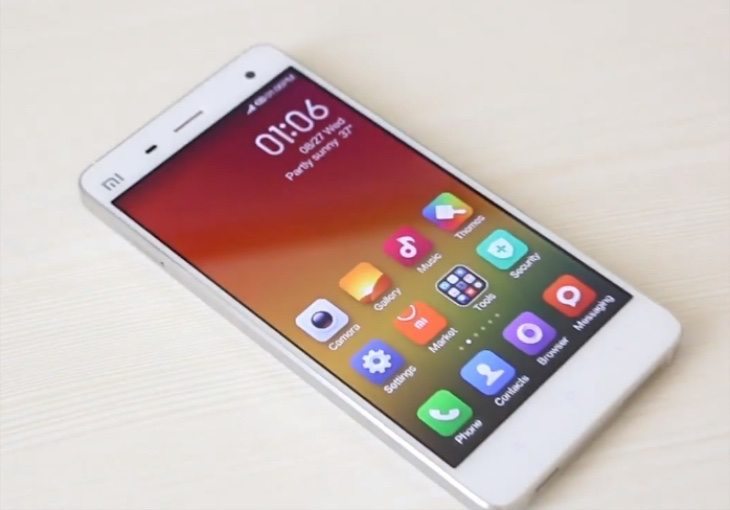 The Xiaomi Mi4 smartphone released last August but is a more recent arrival to the scene in India. Xiaomi handsets have been proving extremely popular recently and the Mi4 is unlikely to be an exception. Something that concerns many potential buyers when buying a new smartphone is the battery life, and so some readers may be interested in Xiaomi Mi4 battery life performance and how it compares with some other handsets on the market.

The Mi4 packs a 3080 mAh battery, which is nicely sizeable and reassuring considering that it’s non-removable. For full specs you might like to take a look at our price and specs comparison of the Mi4 vs. HTC Desire 820, or a recent video look of the OnePlus One vs. Mi4. Battery life testing on the Mi4 has now been conducted and it’s interesting to see how it stands up against other popular devices.

The testing by Fone Arena is split into different categories, Talk Time, 3G Browsing, WiFi Browsing, and Video Playback. Just a few of the comparison handsets include the Moto X 2nd gen, iPhone 6, Samsung Galaxy A5, and Lenovo Vibe X2 as well as the OnePlus One and Desire 820.

For Talk Time the Xiaomi Mi4 managed 16 hours and 39 minutes, putting it around mid-table (image below) behind one of its main rivals the One Plus One that achieved 20 hours. The Lenovo Vibe Z2 Pro was top in this respect as it managed an impressive 33 hours and 19 minutes, and second and third spots were taken by HTC’s Desire 820 and the iPhone 6 Plus. 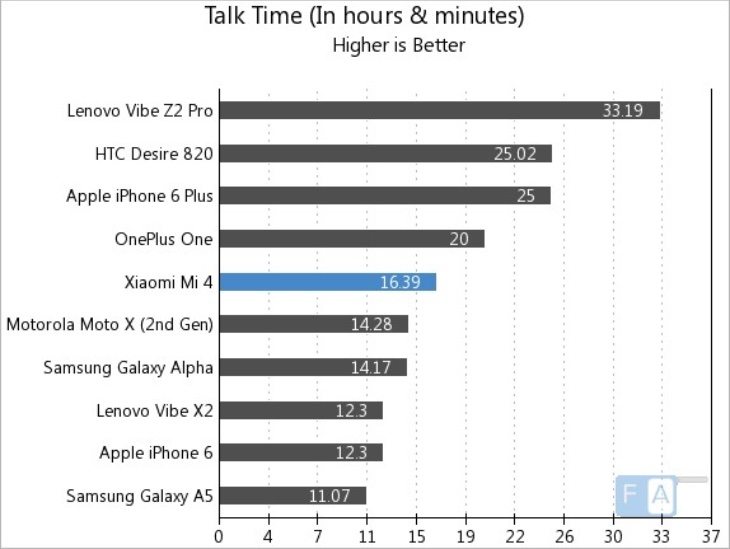 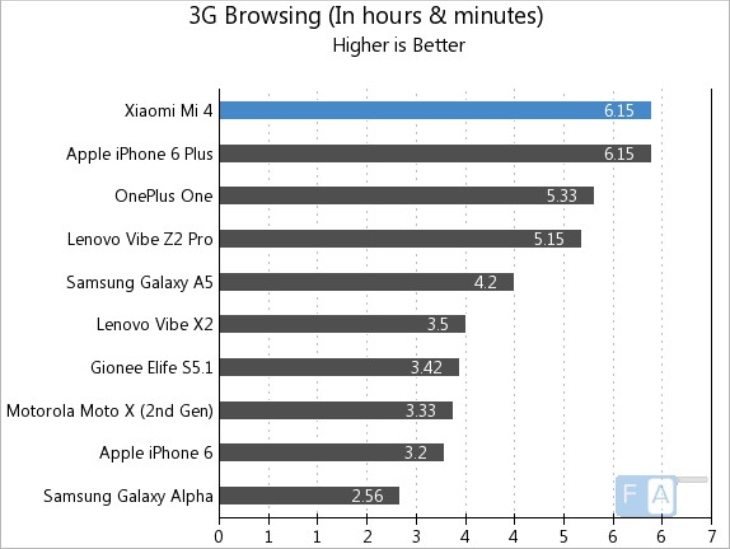 Next we move on to 3G Browsing and in this testing the Xiaomi Mi4 took equal top spot. It achieved a time of 6 hours and 15 minutes, which was matched exactly by the iPhone 6 Plus. By comparison the Samsung Galaxy Alpha was at the bottom after managing only 2 hours and 56 minutes.

Looking at the WiFi Browsing results sees another great result for the Mi4. It attained 9 hours and 5 minutes, tying this time with the iPhone 6 at the very top of the table. The One Plus One is mid-table with 6 hours and 15 minutes while the bottom spot is taken by the HTC Desire 820 on just 3 hours and 12 minutes.

Finally we get to Video Playback and the tables are well and truly turned this time around. The Xiaomi Mi4 is at the very lowest place on the table achieving only 6 hours and 39 minutes. The OnePlus One is third on a time of 9 hours and 5 minutes. Prepare to have your socks blown off by the results of the iPhone 6 Plus though, as it came top in this category with a massive 20-hour score.

We’ve embedded a couple of the tables here but you can see the others at the source link below. It would be good to hear your thoughts on the results of the Xiaomi Mi4 in this battery life testing as it provides a mixed picture. Are you impressed or not?