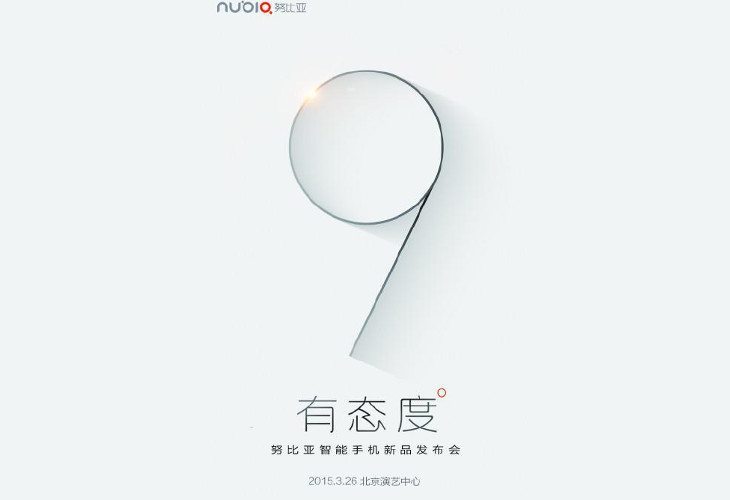 The ZTE Nubia Z9 has been in the rumor mill for quite some time, and while many expected it to appear at MWC, it didn’t show up. That may have been a wise move considering the Galaxy S6 Edge release, but we now know that ZTE plans on showing the Nubia Z9 on March 26.

ZTE has posted a teaser or invite on Weibo, which seems to point towards the ZTE Nubia Z9 release. The handset isn’t show, but a large number “9” is along with the date of March 26, 2015. It’s safe to say the company will be showing off the ZTE Nubia Z9 on that day at an event at the Beijing Performing Arts Center.

The ZTE Nubia Z9 is an interesting smartphone as it’s one of the few handsets that’s managed to keep a few secrets. A few photos have appeared which show a device believed to be the Nubia Z9, and we’ve seen some specs trickle out as well. Nothing has been confirmed, but the ZTE Nubia Z9 could sport a Snapdragon 810 with a 5.5-inch QHD panel and 3GBof RAM. That would definitely put the Z9 in flagship territory, and it’s also rumored to come with barely there bezels.

March 26 is still a few weeks away, but we’re looking forward to seeing what ZTE has in store for us with the ZTE Nubia Z9. The company released some solid smartphones in 2014, and their products are slowly becoming easier to get outside of China. Hopefully, both trends will continue this year.

Are you looking forward to finding out more about the ZTE Nubia Z9?