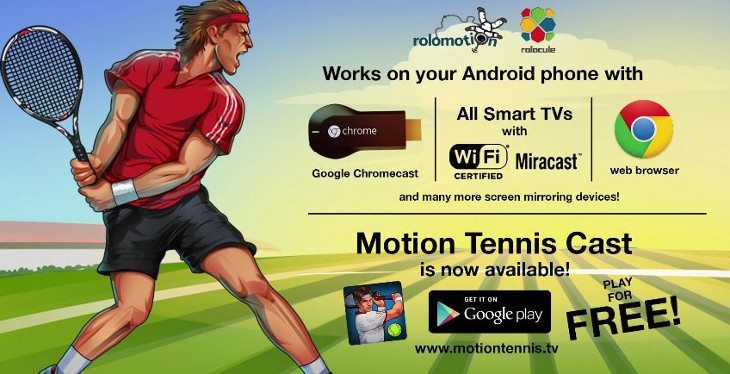 The Chromecast is a wondrous little device, and most folks aren’t aware that it can actually handle a bit of gaming. The selection is small, but slowly growing, and a new game by the name of Motion Tennis Cast may just be the coolest Chromecast game yet.

If you own a newer smartphone, you already know they are jam packed with a variety of sensors. They can easily track our movements throughout the day, and those sensors are the magic behind Motion Tennis Cast. The game turns your phone into a Wii controller of sorts, and tennis-like gestures aimed at your telly take care of the rest.

Motion Tennis Cast is as simple as it is ingenious. Most of the problems with Chromecast gaming come from the fact that it is difficult to get a handle on virtual phone buttons while looking at the big screen. As the phone is used as a motion-based controller in Motion Tennis Cast, it eliminates the need to glance at your phone display while gaming. The game itself is pretty solid as well, and it’s something anyone can pick up and play.

Rolocule Games Motion Tennis Cast is billed as a Chromecast game, but it will actually work with several other mirroring protocols including Miracast, and the Chrome browser. Regardless of how you play, just make sure you hold onto your phone tightly as we’ve all seen what can happen when a Wii remote goes flying across the room. If you’re ready to give it a go, you can pick up Motion Tennis Cast for free on Google Play.