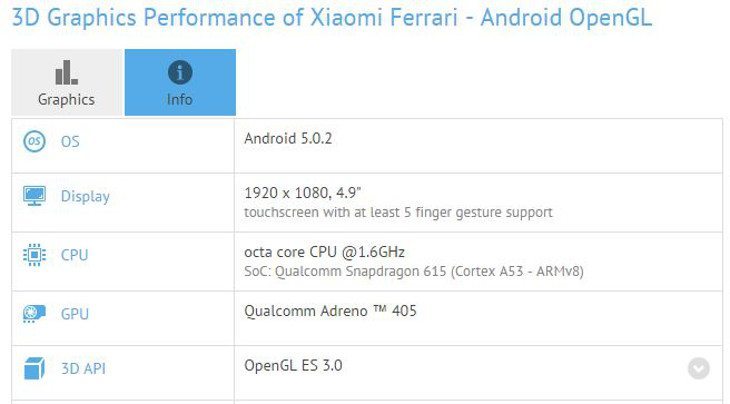 Xiaomi has been in the news quite a bit lately, and when they aren’t throwing a sale, they are working on an endless stream of devices. The latest has just made an appearance on a benchmarking site, and it’s called the Xiaomi Ferrari smartphone. Don’t let the name fool you…

Ferrari’s are fast, luxurious supercars, and if one were to equate the brand with one in the mobile world, we’d probably go with Apple or Sammy. We just don’t think ‘Ferrari’ when we think Xiaomi. Well, that’s the codename of a new handset that’s shown up in the GFXBench database, and unless it’s seriously stylish, the moniker doesn’t suit the specs.

According to the GFXBench listing, the Xiaomi Ferrari smartphone will have a 4.9-inch display with a resolution of 1,920 x 1,080. It will rock a 64-bit Snapdragon 615 under the hood with 2GB of RAM, and the storage capacity is listed at 12GB, but is more than likely 16. As for the cameras, the rear should feature a 13MP sensor while the front-facing snapper is 5MP.

While we know next to nothing about the Xiaomi Ferrari aside from the leaked specs, one would assume it isn’t part of an existing lineup due to the new moniker. The specs aren’t top-tier, but more than respectable and it may turn out to be a hot handset if Xiaomi gives it a proper price tag.