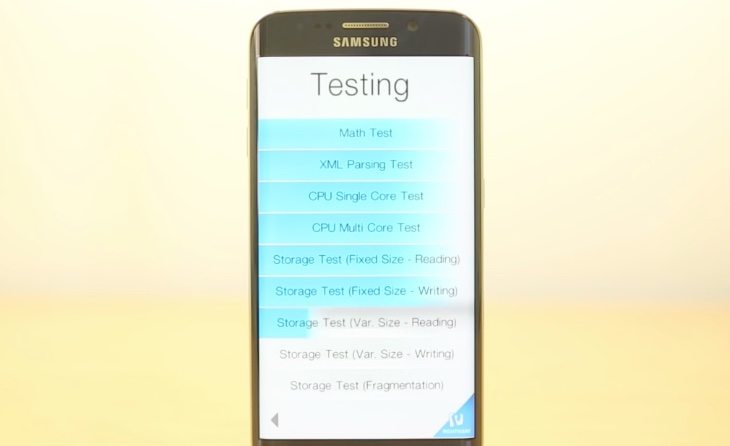 Many buyers around the world are currently getting to grips with the very impressive Samsung Galaxy S6 Edge, the curved edge counterpart of the standard S6 flagship. It has some extremely notable specs including an Exynos 7420 octa-core processor, so we wonder how it will stand up against some of the competition in benchmarking. Today we’re showing a video of Samsung Galaxy S6 Edge benchmarks results compared.

The Exynos 7420 processor has four 2.1GHz Cortex-A57 cores and four 1.5GHz Cortex-A53 cores, Mali-T760MP8 graphics, and 3GB of RAM, so it should certainly hold its own as far as performance is concerned. Beneath this post we’ve placed a YouTube video from Fone Arena that shows a variety of different benchmark tests being carried out on the S6 Edge.

The tests involved in the video are AnTuTu, Quadrant, Linpack Pro, Basemark OS II, Geekbench 3, Vellamo, Basemark X, GFX Bench, 3D Mark, and Nenamark 2. After each bout of testing the score for the Galaxy S6 Edge is shown and then a chart shows how it compares against some other handsets available. Some of these are the Samsung Galaxy Note 4, LG G3, OnePlus One, Nexus 6, Moto X 2nd gen, and there are several others (phones vary by test).

Looking at the results is very interesting, especially if you were still considering whether to purchase it or not. The Galaxy S6 Edge performs extremely well in the benchmarking, coming top of the heap in several of the different tests. If you want to find out much more about the phone you can check out our numerous articles on it so far here. These include comparisons with the Galaxy S6, Galaxy Note Edge, iPhone 6 and more.

After taking a look at the video why not let us know what you think of how the Galaxy S6 Edge fared in this benchmark testing? Has it convinced you one way or the other to purchase this device?