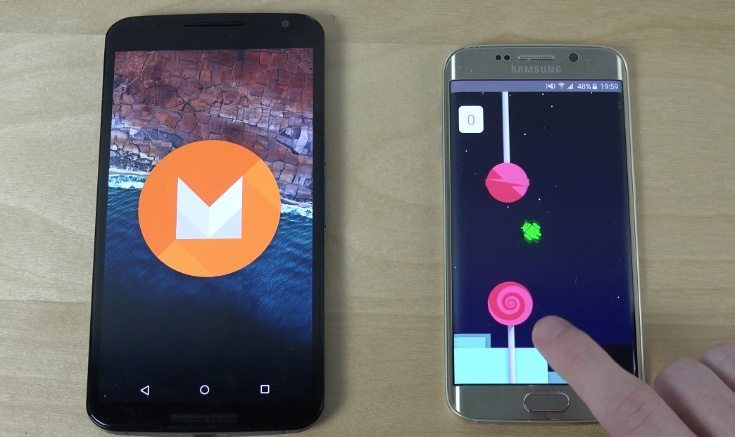 The tech world is buzzing right now after the announcements about Android M at Google I/O last week. The next major Android update hasn’t been given a final name yet and has only been made available as a developer preview so far for a few Nexus devices. We enjoy seeing how various versions of Android perform in different types of testing, and so today we’re sharing a video of the Samsung Galaxy S6 Edge vs. Nexus 6 on Android M in a quick speed test.

The Samsung Galaxy S6 Edge runs Android 5.0.2 Lollipop but is expected to receive the Android 5.1 update in June. The Nexus 6 in the comparison is running the new developer preview of Android M. We’ve embedded a YouTube video below this article from Adrianisen that shows bootup speed testing between these two devices.

The Samsung Galaxy S6 Edge and Nexus 6 are shown alongside each other and you’ll see both being powered up at the same time to see which is first to be up-and-running. One thing to take into account is that the Android M update preview being used on the Nexus 6 is not the final release. Performance of this update could be further optimized with the finished build that is due to release later in the year. So we don’t spoil the suspense of finding out for yourself when you view the video below, we’re not going to give the result here but there’s a significant time difference between the two.

After the bootup comparison the reviewer also gives us a look at a few of the changes that come with Android M when compared to Lollipop 5.0.2. Readers might also be interested in another bootup test that we previously shared of the Nexus 6 on Android M vs. the Nexus 5 on Android 5.1.

We’d like to hear what you think about the outcome of this bootup speed test between the Samsung Galaxy S6 on Android 5.0.2 and the Nexus 6 on Android M, so do send us your comments. Did the result surprise you or not?