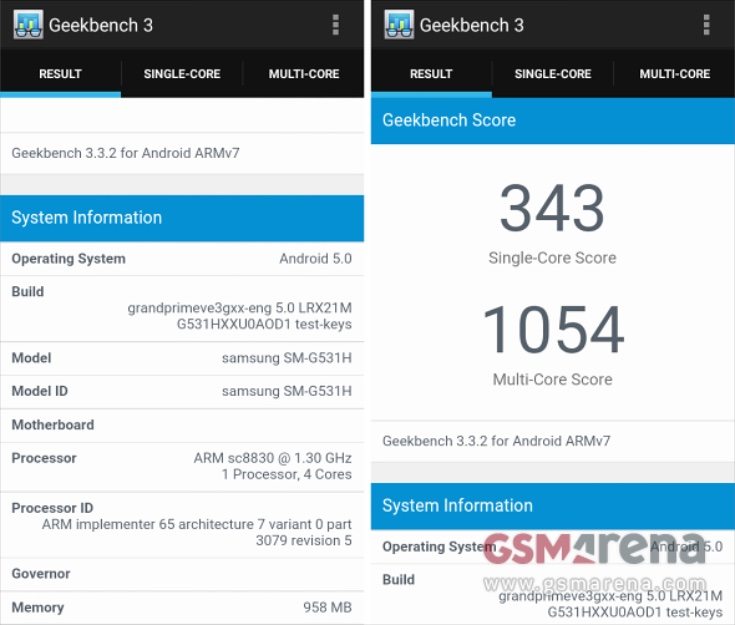 When we first reported on the Samsung Galaxy Grand Prime VE we told how one of the only differences between it and the regular version was that the new Value Edition would release running Android 5.0 Lollipop. Another difference later reported between them was that the VE Grand Prime would have a Marvel PXA1908 chipset rather than the Snapdragon 410 used in the standard version.

Now GSMArena has given some further details on this from an informant who claims to have the Value Edition. It appears that in fact the processor used for the Samsung Galaxy Grand Prime VE is in fact a 1.3GHz Spreadtrum SC8830 quad-core processor. GSMArena have actually compared their own Geekbench 3 benchmark for the standard Galaxy Grand Prime with a user-submitted benchmark for the Value Edition, and found that the performance of the latter is below that of the regular version.

Some of this could be due to the fact that testing conditions were different and that the phones were running different versions of Android. However, perhaps we should expect a poorer performance from the value model anyway, which should of course be reflected in the price tag.

Other specs of the Value Edition are thought to be 1GB of RAM, 8GB of internal memory, an 8-megapixel rear camera, 5-megapixel front-facing unit, 2600 mAh battery, and 4G LTE connectivity. Given the leaks on the phone we hope to be hearing something official soon. We’ll pass on developments as we hear them.

Are you a prospective customer for the Samsung Galaxy Grand Prime Value Edition? What price would you expect to pay for this version of the popular handset?