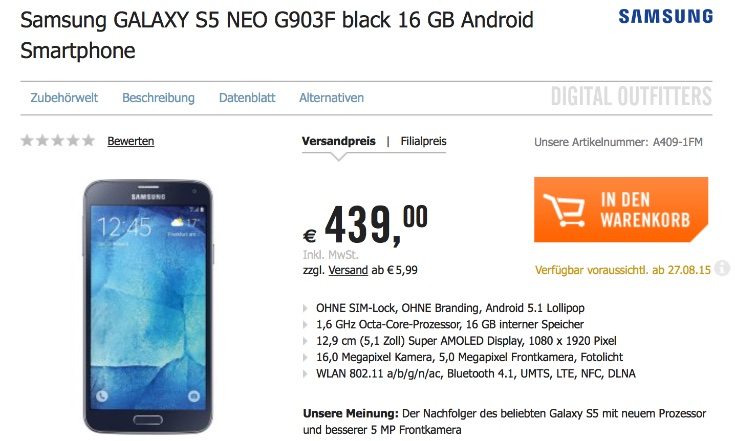 We’ve been reporting on the Samsung Galaxy S5 Neo for what seems like an age, but signs are finally growing that the phone will release very soon now. At the end of July we informed readers that pre-orders for the device had shown up in the Netherlands and it looked set for availability at some point this month. Now a Samsung Galaxy S5 Neo shipping date has been revealed as pre-orders spread.

The retail listing from a Dutch retailer gave specs for the device and a price of around â‚¬429. Now the smartphone has also appeared for pre-order in Germany, and this time the price is listed at â‚¬439. This ties in very nicely with the previous sighting and equates to around Â£314, $489, or Rs. 31,700 although pricing will vary by region.

The online German retailer also gives a shipping date for the Samsung Galaxy S5 Neo, and it will be up for grabs from August 27. We often see early listings for devices before they are officially announced, but this indicator is promising as it hasn’t been pulled yet and has been showing for a while now. Specs and features of the latest pre-order page spot from Germany also tally with the earlier retail spot from the Netherlands.

Connectivity for this new Samsung smartphone includes support for LTE Cat. 6, WiFi 802.11 a/b/g/n/a/c, and Bluetooth 4.1. The phone is listed as running the Android 5.1 Lollipop operating system, and features include a heart rate sensor (but not a fingerprint scanner), and also dust and water-resistance.

Have you been waiting patiently for the release of the Samsung Galaxy S5 Neo? What are your thoughts on the pricing of this upcoming handset? Let us have your comments on this.