The Microsoft Lumia 550 first appeared on our radars back in July where it leaked alongside two other unannounced Lumia smartphones. We have crossed paths with the diminutive handset again today, and can now confirm those specs while adding a few more details.

It’s safe to say that people are chomping at the bit for a new high-powered Nokia smartphones — unfortunately, the Microsoft Lumia 550 isn’t it. The previous leak showed a device listed asÂ  prototype that was “still in development” and today’s leak comes straight from the database of a Microsoft distributor. Ready for another round of Microsoft Lumia 550 specs?

The new leak shows the Microsoft Lumia 550 sporting a 4.7-inch panel with a resolution of 720p. Behind the glass, you’ll find a quad-core Snapdragon 210, which is backed by 1GB of RAM, and the storage capacity clocks in at 8GB. The rear camera is a respectable 5MP, but the front-facing snapper takes a dip down to 1.2MP. The usual connectivity options should be present along with Dual-SIM capabilities and 4G LTE although the battery size is still up in the air. 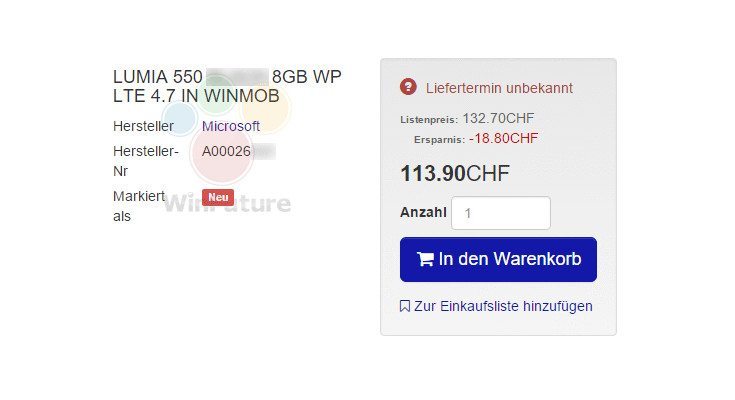 We still don’t have any concrete information on the Microsoft Lumia 550 release date, but it’s expected to arrive sooner than later and possibly at the October 6th event in the NYC. As you’d expect, it will be affordable with a rumored price tag of around $120.