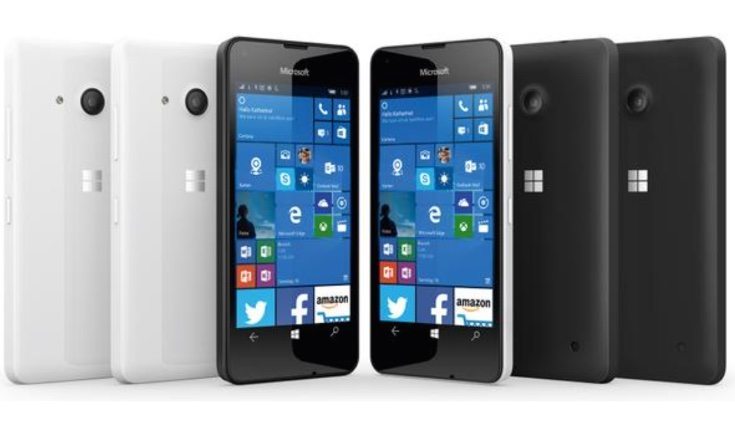 There’s plenty of focus on the new top-flight Microsoft Lumia 950 and 950 XL that are due to be announced at an event on Tuesday. Another device that could be made official is the Microsoft Lumia 550, a smartphone for the lower end of the market. Now the Lumia 550 is the subject of a new claimed press render that looks pretty convincing as the real deal.

We’ve already heard some leaked specs for the Microsoft Lumia 550 and also seen a leaked image claiming to show the front of the device in various colors. This new image is a far glossier affair and ties in with the previous picture, although it also shows the back of the handset. While we cannot verify the authenticity of the image, it’s certainly official looking and comes from usually reliable leaker @evleaks.

Unofficial specs of the Lumia 550 so far include a 1.1GHz Snapdragon 210 quad-core processor, 4.7 or 5-inch display with HD resolution of 1280 x 720, 1GB of RAM, and 8GB of internal memory that can be expanded via microSD. There’s a 5-megapixel rear camera with flash, and 2-megapixel front-facing shooter also with flash. Further specs include a 1905 mAh battery and 4G LTE support.

It’s thought that that like the new Lumia 950 and 950 XL, the Lumia 550 will be running Windows 10 Mobile out of the box. A previous leaked suggested it to be coming in black, blue, red, or white colors. However, later leaks have suggested only black or white versions as shown here. Although the entry-level Lumia 550 might make an appearance at the Microsoft event on Tuesday, we haven’t heard too much about this, so at the moment it’s a case of wait and see.

In the meantime it would be good to know your thoughts on the Microsoft Lumia 550. Are you a potential customer of the budget 550? Do send your comments to let us know.