Android One phones now being treated to Android Marshmallow update 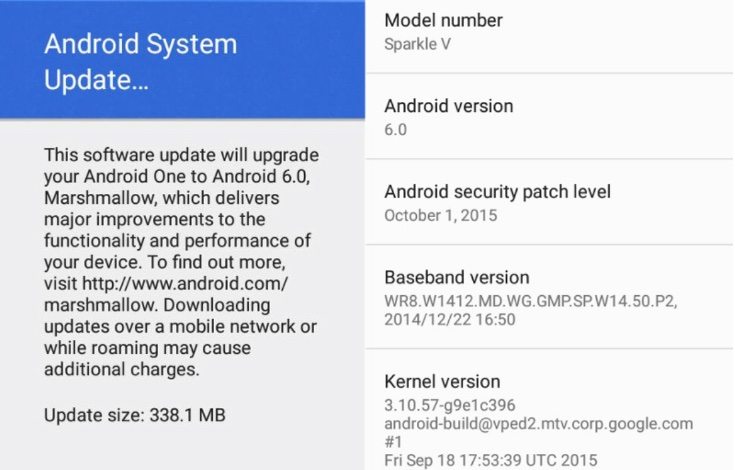 Google’s Android 6.0 Marshmallow update is currently being unleashed to some Nexus devices, but it’s often the case that new major upgrades can take many months to reach different smartphones and tablets, including high-end ones. Therefore some will be pleased to know that some of the budget Android One phones are now being treated to the Android Marshmallow update.

We’ve been tracking news of the update for various manufacturers’ devices, including recent lists for Motorola, HTC, and Sony devices. Budget handsets are often at the end of the line for receiving Android upgrades, but Android One phones are aimed at emerging markets and offer affordable prices and guaranteed Android updates.

The first Android One smartphones to release in India were the Micromax Canvas A1, Karbonn Sparkle V, and Spice Dream Uno Mi-498, and these all received the Android 5.1.1 Lollipop update back in June. Now we’ve heard that the Android 6.0 Marshmallow release is already being received for some of these devices. Some owners of these smartphones have reported the arrival of the update, although there’s no news just yet for those who have the later Lava Pixel V1.

The OTA (over-the-air) Android 6.0 update is 338.1MB in size. Although it has already started rolling it’s likely to be pushed out in stages, so a little patience may be required before you get a notification to your device. The Android Marshmallow update will bring performance optimizations and plenty of new features to your Micromax Canvas A1, Karbonn Sparkle V, or Spice Dream Uno Mi-498.

If you are the owner of any of the above Android One smartphones we’d really like to hear from you. Are you one of the lucky ones who have already received the Android Marshmallow update for your device? If so, what are your thoughts on what the upgrade offers? It’s always good to hear reader feedback so do let us know.