Last week, an interesting bit of information came to light regards a smartphone from Pepsi. Today we’ve learned the Pepsi P1 smartphone actually exists, and we’ve gotten the scoop on the specs as well.

It’s not uncommon to see a company slap their name on a smartphone made by a different company as there’s a lot of money to be made with branding. The Pepsi P1 smartphone is going to be a bit of an oddity, and while we don’t know if a Coke phone is on the way, we do know what the Pepsi P1 smartphone will pack under the hood.

The Pepsi P1 is set to be a phablet-sized smartphone with a 5.5-inch panel featuring a resolution of 1,920 x 1,080. Beneath the glass beats an octa-core chip in the form of the MediaTek MT6592, which is backed by 2GB of RAM. As for the storage, you’re getting 16GB but there’s been no mention of expansion at this time. Other options to note include a 13MP/5MP camera combo, a 3,000mAh battery, and Android 5.1. 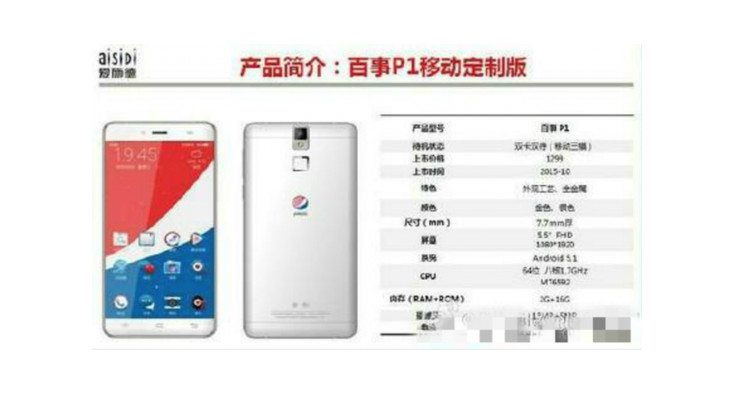 If Pepsi is your beverage of choice, the Pepsi P1 smartphone may be the device of your dreams, but you shouldn’t get too excited just yet. The device looks to be a regional release with a price of around $205, but we should know more next week as the Pepsi P1 is expected to be shown off on October 20th.