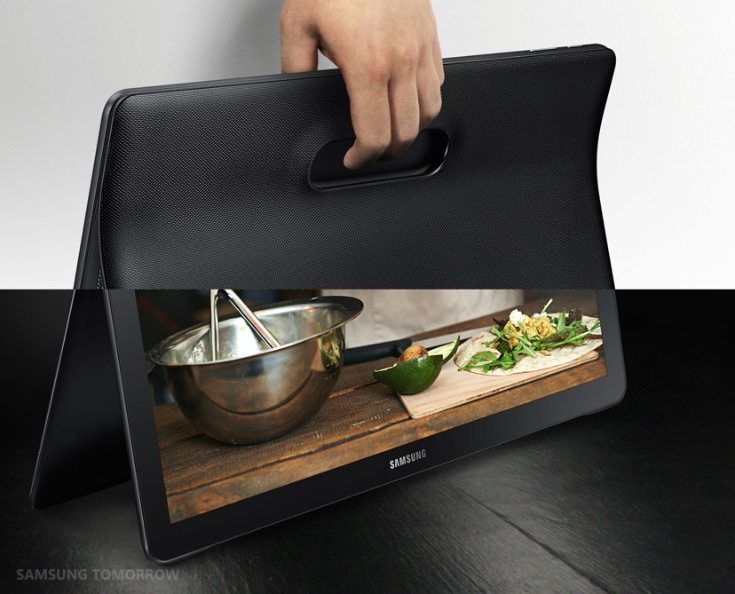 We’ve been hearing more and more leaks about the Samsung Galaxy View and now the specs have been officially announced for this mammoth tablet. The device may not have the most impressive specs but it’s bound to attraction attention if only for its sheer size. Read on for the confirmed specifications and more.

Recently we showed some leaked images of this slate that showed the fortunate inclusion of a kickstand. We say this because you won’t want to be holding the Samsung Galaxy View for too long as it weighs in at 2.65kg. The two-way stand is also assisted by rubber feet on the tablet to stop it sliding around. The Galaxy View measures 275.8mm x 451.8mm x 11.9mm, but just in case you want to treat it as a portable device there’s also a convenient carrying handle.

The tablet packs a 1.6GHz Exynos 7580 octa-core processor, and it has an 18.4-inch TFT LCD display with full HD resolution of 1920 x 1080 resulting in 123 ppi. Just in case you haven’t been following news about the Galaxy View that’s not a typo, the screen size really is 18.4-inches. It has 2GB of RAM, and internal storage options of 32 or 64GB, expandable with microSD. 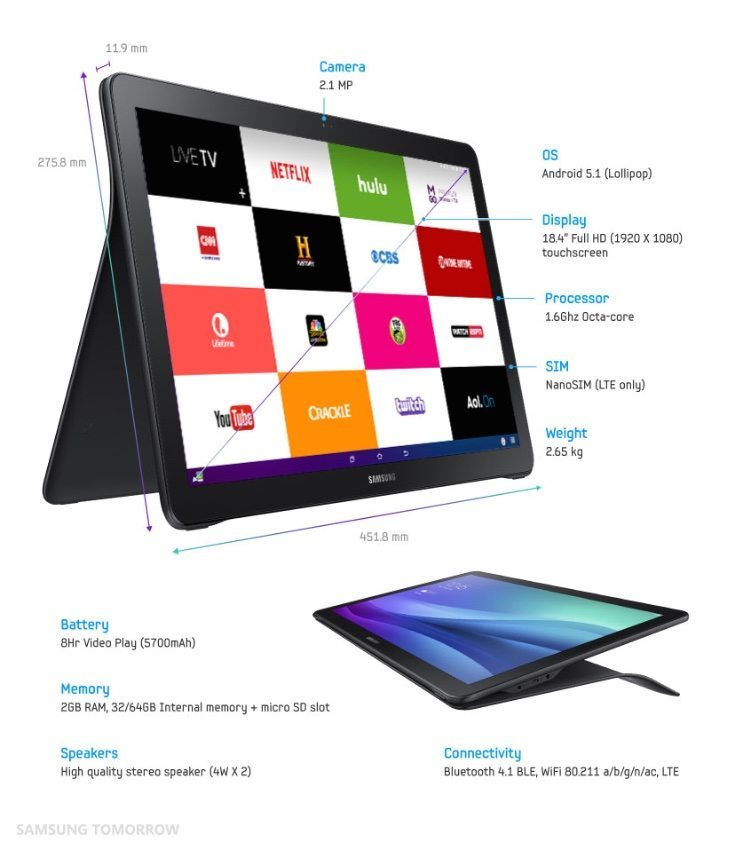 At the front the Samsung Galaxy View has a 2.1-megapixel camera, but perhaps unsurprisingly given its size there’s no rear camera. Connectivity options include WiFi 802.11 a/b/g/n/ac, Bluetooth 4.1, and an LTE version with nano-SIM. The tablet has a 5700 mAh battery that Samsung claims will provide up to 8 hours of video playback. There’s also a dual 4W stereo speaker arrangement for a better video content experience.

The tablet is running the Android 5.1 Lollipop OS skinned with Samsung’s Media UX. Samsung has still to announce the official price of the Samsung Galaxy View. A recent specs and price leak listed it at $599 but that has yet to be confirmed so do keep that in mind. However the official specs do match the same retailer spot so this price could also be accurate.

You’re not going to fit this whopping tablet in your Christmas stocking, but maybe you’re going to add the Samsung Galaxy View to your wish list? What are your first thoughts on this new tablet from Samsung?