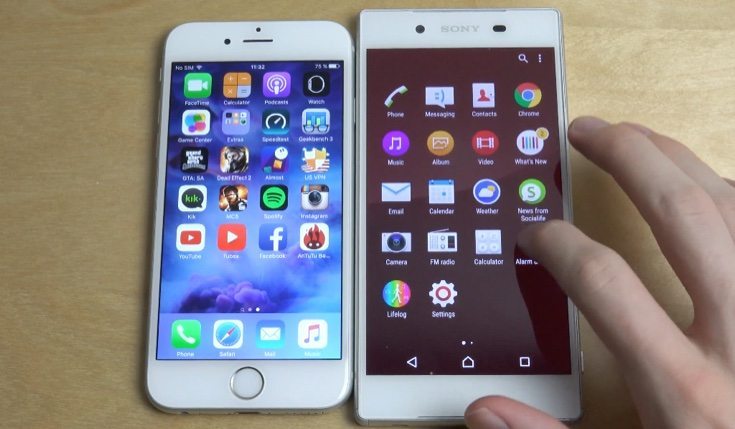 The Sony Xperia Z5 flagship recently released and joined other top-end smartphones such as the Apple iPhone 6S. When thinking of purchasing a new handset it can be interesting to see how certain aspects compare. With this in mind we’re looking at Sony Xperia Z5 vs iPhone 6S benchmark, bootup, and Internet speed testing.

We’ll outline some key specs of the handsets before we begin. The Xperia Z5 packs a Snapdragon 810 octa-core processor (four cores at 2GHz and four at 1.5GHz), Adreno 430 graphics, and has 3GB of RAM. It has a 5.2-inch display with Full HD resolution of 19290 x 1080, and runs the Android 5.1.1 operating system with a planned upgrade to Android Marshmallow.

On the other side of the coin the iPhone 6S is equipped with a 1.84GHz Apple A9 dual-core processor with motion coprocessor, PowerVR GT7600 graphics, and 2GB of RAM. The display is 4.7-inches with resolution of 1334 x 750, and the phone released on iOS 9, with the most recent update being iOS 9.0.2.

For the purposes of this article we’ve embedded three videos below, all from regular contributor Adrianisen. These provide an informal look at various speed markers, starting with a Sony Xperia Z5 vs iPhone 6S benchmark test. You’ll see the AnTuTu benchmark test being conducted and the phones are shown alongside each other. Interestingly, one of the phones is notably quicker to finish the test but the other phone has a higher benchmark score. You can see the video to see which is which, as we are not going to spoil the suspense!

The second video is of a Sony Xperia Z5 vs iPhone 6S bootup speed test. Both are powered up at the same time to see which is ready to use first, and one is significantly faster than the other. In fact the result surprised us, as we don’t recall seeing such a notable time gap in any previous bootup testing that we’ve seen. The reviewer also seems puzzled by how slow one of them is. You’ll also see a quick look of how the user interfaces of the phones compare.

The final video is of Sony Xperia Z5 vs iPhone 6S Internet speed testing. The reviewer shows that both are running on the same WiFi network before the test begins, and also closes down anything running in the background. The Ookla Speedtest is then conducted and you’ll see the download and upload scores for both phones. The reviewer then performs the test again using a different server, and you’ll see the outcome when you view the video.

After you’ve checked out these various speed tests for the Sony Xperia Z5 vs iPhone 6S we’d like to hear from you. Were you surprised at any of the results from the benchmark, bootup, and Internet tests?