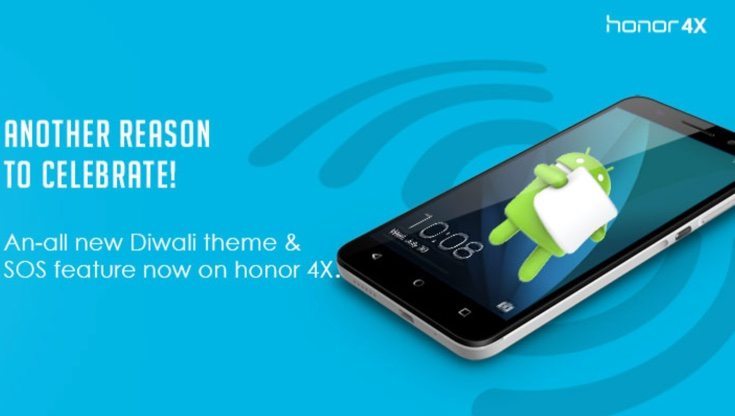 The new EMUI 3.1 update for the Honor 4X smartphone is still based on Android 5.1, and brings several changes and improvements. The latest upgrade for the phone (Che1-L04C900B330) is an OTA (over-the-air) update. Alternatively users of the device can upgrade through the SD card but should back up all data before beginning, as data will be lost while updating.

One of the additions with this new Huawei Honor 4X update is a Diwali Theme with a new wallpaper for the collection and icons designed with Diwali elements. There’s also an SOS feature that can be activated in an emergency be pressing a certain combination of buttons. This will immediately issue an alert that you need help and give your precise location and cell ID to emergency contacts. You’ll need to head to Settings and Emergency Services to configure this.

This latest update also offers Google Patch Integration for Stagefright vulnerability fixes. If you’re hoping that the Android Marshmallow Huawei Honor 4X update will arrive soon, there’s still quite a while to wait. The Honor 4X was included among the recently confirmed Huawei devices that will receive Marshmallow, although its not scheduled to start rolling out until February next year.

For full details on this second Android L Huawei Honor 4X update, you can see more at the Huawei blog source below. You’ll find full details of the changes that the upgrade brings, including step-by-step instructions for how to configure the SOS feature. On the same page you can also see full instructions on how to upgrade your phone, either over-the-air or through the SD card.

Are you pleased to hear this latest Huawei Honor 4X update is now rolling? Maybe you were hoping it would be the Android Marshmallow update instead?