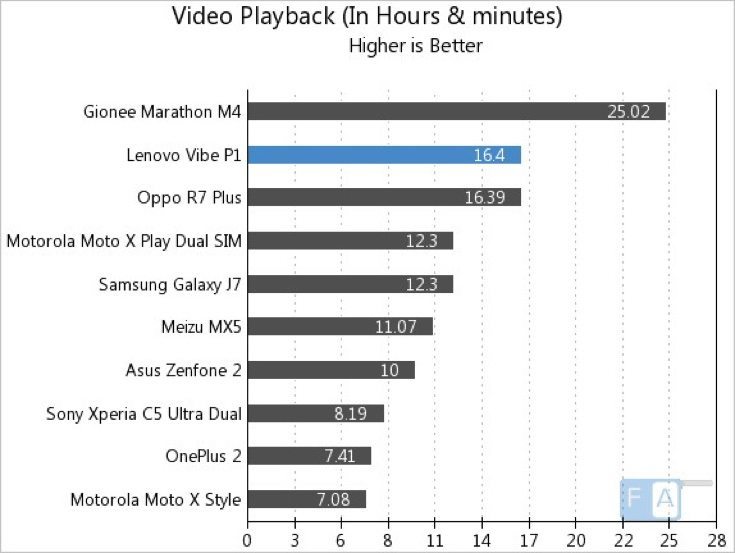 The Lenovo Vibe P1 smartphone hit the shelves in October and is a mid-range handset that packs a very nicely sizeable 5000 mAh battery. The P in the title stands for power, and therefore it should be really interesting to see the results of battery testing on the device. We have news of Lenovo Vibe P1 battery life results vs. the Galaxy J7, Moto X Play and more.

You can check out full specs of the Lenovo Vibe P1 in our launch article on the phone, or our later post on the price of the device for India. The battery is what we’re focusing on here though, as for many people this is an increasingly important factor when purchasing a new smartphone.

The Lenovo Vibe P1 battery life has now been tested with Fone Arena’s usual array of battery tests. The results were then placed on tables alongside numerous other handsets to see how it stands up in this regard. As well as the Samsung Galaxy J7 and Moto X Play, the battery life results are compared with those of the OnePlus 2, Meizu MX5, Sony Xperia C5 Ultra, Gionee Marathon M4, and others.

There are four main categories for testing, and they are Talk Time, 3G Browsing, WiFi Browsing, and Video Playback. For Talk Time the Lenovo Vibe P1 achieved equal top spot on the table with a time of 33 hours and 19 minutes. That was exactly the same as several other handsets, namely the Gionee Marathon M4, Moto X Play Dual SIM, Galaxy J7, Oppo R7 Plus, and Moto X Style. The Xperia C5 Ultra was in bottom spot on 16 hours and 39 minutes, as shown in the image below. 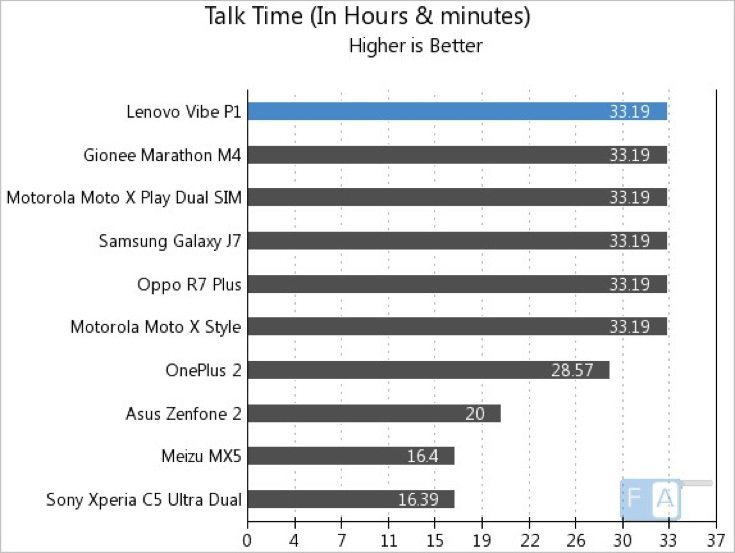 For 3G Browsing the Lenovo Vibe P1 reached second spot with a time of 8 hours and 20 minutes. It was beaten only by the Gionee Marathon M4 with 10 hours, while the Samsung Galaxy J7 was third with 6 hours and 40 minutes. The Moto X Play was further down the table on 6 hours and 15 minutes, while languishing at the bottom was the Moto X Style on only 3 hours and 34 minutes.

The final category of testing was for Video Playback (image below). The winner again was the Gionee Marathon M4 on a whopping 25 hours and 2 minutes. Second spot was taken by the Lenovo Vibe P1 with 16 hours and 40 minutes. The Moto X Play tied for fourth place alongside the Galaxy J7 on 12 hours and 30 minutes. Again the Moto X Style came in last spot with 7 hours and 8 minutes.

If you want to see the full tables, more about the battery testing procedures, and a OneCharge rating for the Vibe P1, please head to the source below. Overall we’d have to say the Lenovo Vibe P1 performs well for battery life, just as you would expect given the size of its battery. As a point of interest we’ll tell you that the Gionee Marathon M4 also has a 5000 mAh battery. The Gionee Marathon M5 is also about to release and has an even bigger 6020 mAh battery.

Given these Lenovo Vibe P1 battery life test results, are you satisfied by its performance in this area? Do let us know by scrolling down to the comments box.