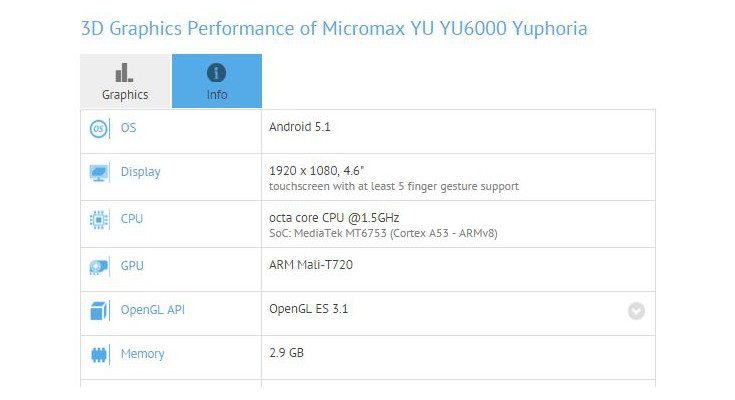 It’s safe to say Micromax made some new fans when they rolled out their YU line of smartphones. Well, there may be a new one in the works as a new YU handset has just gotten benchmarked online.

A number of devices roll through Benchmarking sites each month, and we’ve just gotten a bit of a surprise from YU. The smartphone in question is called the Micromax YU YU6000 Yuphoria, and it looks to be a variant of the device by the same name that was released over the summer.

The YU YU6000 Yuphoria will have a small 4.6-inch display that sports a resolution of 1,920 x 1,080. While it’s smaller than the panel found on the YU Yuphoria, it has a higher resolution. The chip powering the panel is listed as the increasingly popular octa-core MediaTek MT6753, and it’s backed up by 3GB of RAM.

As usual, we don’t know about a microSD card slot, but the internal storage will be 16GB. Last but not least are the cameras with a 13MP rear snapper and an 8MP sensor for your selfies. Nothing was mentioned with the battery, but as this model has a better display and specs something larger than the 2,230mAh battery found in the previous model should be in line.

While the Micromax YU YU6000 Yuphoria is far from official, there is one thing for certain — it will get a name change. It’s also a solid upgrade over the original device with an upgraded display, more RAM and better cameras. We expect the device to be popular whenever it arrives, so we’ll keep you in the loop as we learn more about the new YU smartphone’s release date.