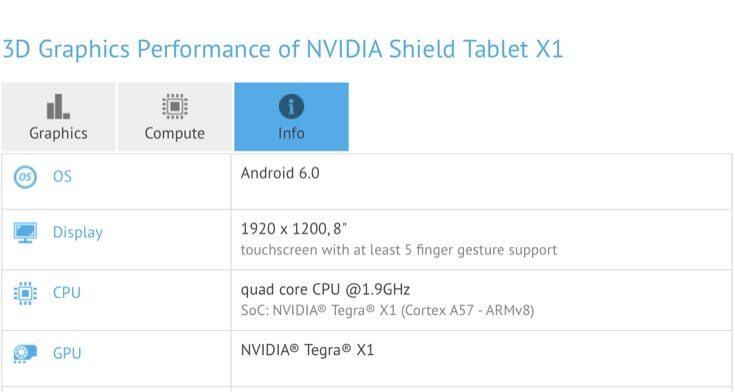 It was way back in February this year that we first reported on rumors of a successor to the original Nvidia Shield Tablet. It was tipped to carry the Tegra X1 chipset and it looked as though the slate would release in the next few months. The new tablet hasn’t arrived yet, but now the Nvidia Shield Tablet X1 has been spotted in benchmarking and this has revealed some specs for the device.

The upcoming slate has made an appearance on GFXBench and this shows a few of the specifications. The Nvidia Shield Tablet X1 is listed as having the Tegra X1 chip, although peculiarly only the four Cortex A-57 cores are acknowledged while there should also be four Cortex A-53 cores. We’ll assume that’s a blip in the listing as this can happen in benchmarks.

Other Shield Tablet X1 specs revealed are an 8-inch display with 1920 x 1200 resolution, 3GB of RAM, and 32GB of internal storage. Connectivity options of WiFi, Bluetooth, and GPS are also shown, along with the fact that it’s running the Android 6.0 Marshmallow OS. The display therefore remains the same as for the original Shield Tablet, but there’s more RAM.

Once we start seeing sightings of benchmark leaks we usually start seeing new devices turn up for certification processes, so we can expect further news on the tablet soon. Are you keen to hear more about the upcoming Nvidia Shield Tablet X1? What else is on your own wish list for this device?