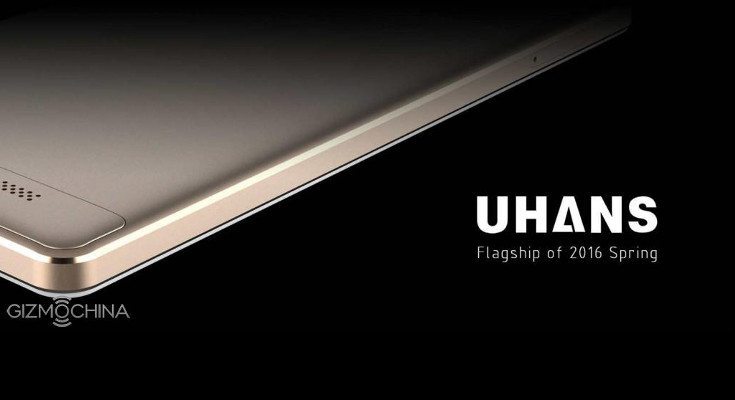 We’re used to seeing details leak out extremely early about high-end flagships, and it looks like the smaller manufacturers are getting in on the action as well. UHANS may not be a name you know, but details regarding their 2016 flagship have just trickled out.

UHANS isn’t a brand we’ve covered before, but they’ve cranked out a few handsets like the UHANS U100 which borrowed a page or two from Vertu’s design book. That handset is currently up for presale at various outlets, and their new nameless smartphone is set to arrive next year. That doesn’t stop specifications from getting out through unofficial (or official) means, so we’re going to take a quick look at what their new flagship will bring to the table.

The photo of the unannounced UHANS doesn’t give us much to go on, but it looks to have a metal build and beveled edges like most of its brethren. The overall dimensions are unknown, but it will be relatively thin at 7.2mm and will sport a large 5.5-inch display covered in 2.5D glass with on-cell touch tech. It will also have 3GB of RAM and 16GB of internal storage, so we’re going to assume it will come with one of the popular MediaTek octa-core chips.

Connectivity options are still up in the air, but given the specs we believe it should come with 4G LTE along with the usual suspects. What’s more certain is the cameras, as it will have a 13MP Sony sensor on its backside to go along with a 5MP front-facing camera. The new UHANS flagship will run Android 6.0 out of the box whenever it lands next year.

The UHANS smartphone is set to debut in 2016, but it won’t be the first of the year as the photo says Spring. While that’s quite a ways off, we know most of the handset’s specifications and it will arrive in four different colors as well with Rose Gold, Silver and two unannounced colors.