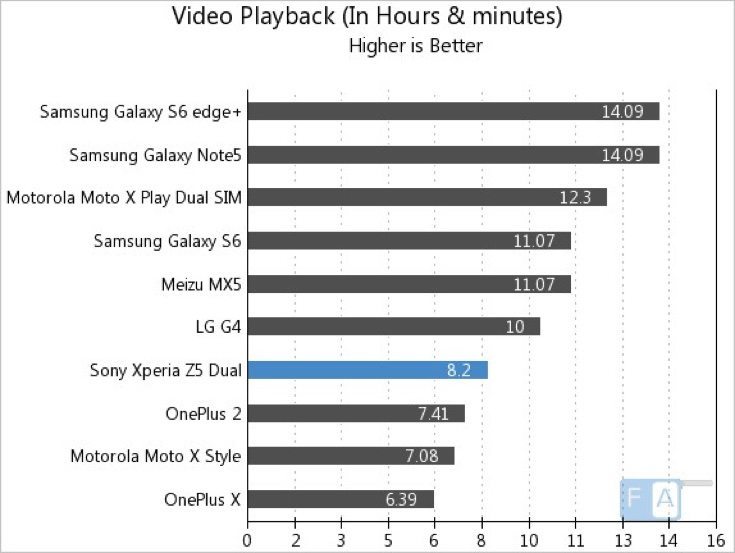 The Sony Xperia Z5 is the latest flagship from the company and was announced alongside the Xperia Z5 Premium and Z5 Compact. It’s a high-end smartphone with a price to match, so if you’re thinking of investing in it you might want to know how it fares as far as battery performance is concerned. Today we’re considering Sony Xperia Z5 battery life vs. Galaxy S6, LG G4 and more.

Battery life is a factor that’s increasingly important for many when purchasing a new device, and the Xperia Z5 has a 2900 mAh battery featuring Quick Charge 2.0 support. Fone Arena has conducted its usual array of battery testing on the device, and in fact this was on the dual SIM version of the phone that has the same battery size. The testing was split into four main categories, Talk Time, 3G Browsing, WiFi Browsing, and Video Playback.

The Xperia Z5 battery life test results were then placed on tables that showed its times alongside numerous other popular smartphones. Apart from the above-mentioned Samsung Galaxy S6 and LG G4, just a few of the other devices its results were compared with were the OnePlus 2, Samsung Galaxy Note 5, OnePlus X, and Moto X Style.

In the Talk Time testing the Xperia Z5 Dual managed a time of 25 hours and 2 minutes, exactly the same as the Samsung Galaxy S6 Edge+ and Galaxy Note 5 (see image directly below). In equal top position on the table were the Moto X Style, Moto X Play, and One Plus X that all attained times of 33 hours and 19 minutes. The LG G4 was further down with a time of 20 hours, while the Galaxy S6 was in last position with only 16 hours and 40 minutes. 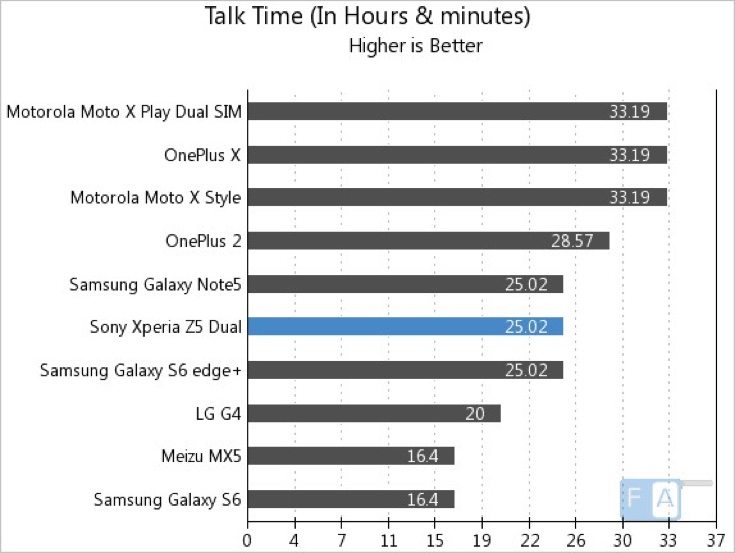 Moving on to WiFi Browsing, again the Xperia Z5 was in the lower part of the table with a time of 5 hours exactly, the same as for the OnePlus 2. The Galaxy S6 achieved a time of 5 hours and 53 minutes and the LG G4 was on 4 hours and 32 minutes. Once again the Samsung Galaxy Note 5 took top spot with an impressive time of 10 hours, and last in line was the Moto X Style with 4 hours and 20 minutes.

Finally we get to Video Playback testing, and the Xperia Z5 managed another pretty average performance with a time of 8 hours and 20 minutes. This time top place was jointly the Galaxy S6 Edge+ and Galaxy Note 5 on 14 hours and 9 minutes. The Galaxy S6 and LG G4 were both above the Xperia Z5 on times of 11 hours and 7 minutes and 10 hours respectively. Bottom spot was taken by the OnePlus X on 6 hours and 39 minutes, as shown in the image below.

From the results in this Sony Xperia Z5 battery life testing we’re underwhelmed with the times managed by the phone. However, it’s worth remembering that this handset still has plenty to offer, and if you want to find out more you might like to take a look at our Xperia Z5 review roundup. For all of the tables, a OneCharge rating, and information on how the battery testing was conducted, please head to the source below.

We’d be interested to hear what you think of the Xperia Z5 battery life results from this round of testing, so do send us your comments.