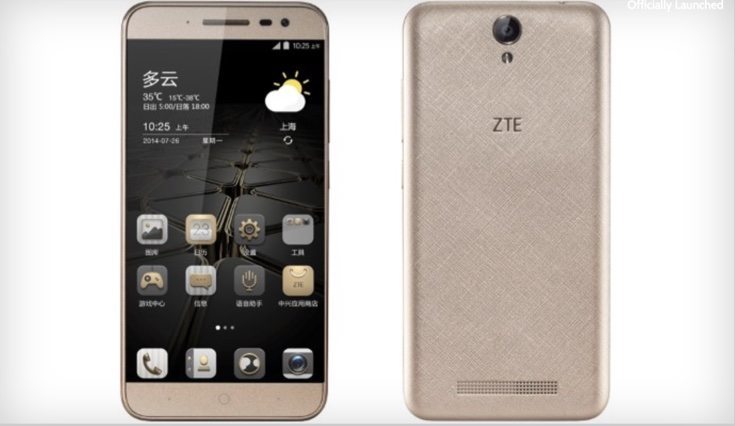 ZTE have been producing some very decent smartphones with competitive prices over the last year or so, and have just introduced another one in China. This time it’s a contrast to the high-end ZTE Axon Max that recently launched and is instead an entry-level handset. Meet the ZTE Voyage 3, and we have specs and price news up ahead.

The phone is equipped with a 1GHz MediaTek MT6735 quad-core processor, a 5-inch IPS display with HD resolution of 1280 x 720, 1GB of RAM, and 8GB of internal memory (expandable via microSD to 32GB). It packs an 8-megapixel autofocus rear camera with LED flash, a 5-megapixel front-facing snapper, and a nicely sized 4080 mAh battery. This is said to offer juice for up to 355 days on standby or up to six days of regular use.

The ZTE Voyage 3 is a dual SIM phone (4G LTE support with the first SIM), and further connectivity options include WiFi, Bluetooth 4.0, GPS, and microUSB 2.0. It runs the Android 5.1 Lollipop operating system skinned with a customized UI and is 8.4mm thick, weighing in at 150g. It features reverse charging so it can be used to charge further devices using an OTG cable, and the back cover of the handset is removable. The phone will be sold both at retail stores and online.

Do you think the ZTE Voyage 3 smartphone sounds like an attractive proposition at this price? We’re always interested to hear what readers have to say, so do drop us a comment using the box provided below?