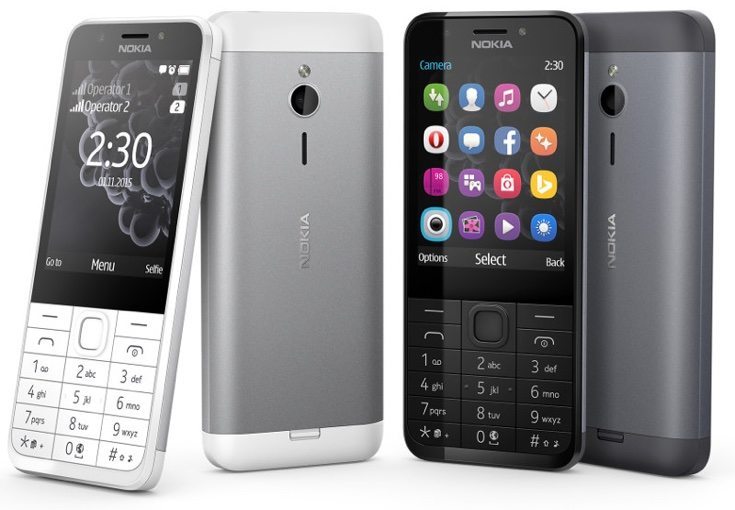 Just over a month ago Microsoft officially announced its Nokia 230 and 230 Dual SIM feature phones. It was set to release in December in several markets, and sure enough in the last few days it was launched for India. We have information on the Nokia 230 price in India, as well as specs and more for this selfie feature phone straight ahead.

It’s the dual SIM version of the Nokia 230 feature phone that has arrived for sale in India, just as we would have expected. It’s available to buy right now at Microsoft India’s official online store, and the Nokia 230 price is Rs. 3,869. Specifications consist of a 2.8-inch LCD display with resolution of 320 x 240, 16MB of RAM, and expandable memory via microSD to 32GB.

Further Nokia 230 specs include a 2-megapixel rear camera (fixed focus) with LED flash, as well as a 2-megapixel front-facing snapper, also with LED flash. It uses Nokia’s Series 30+ OS, and connectivity options include 2G, Bluetooth 3.0 with Slam sharing, and microUSB. It’s juiced by a 1200 mAh battery offering up to 22 days on standby or up to 21 hours of talk time.

This phone includes FM radio and a 2.5mm audio jack, and it comes in silver or dark silver color choices. The handset measures 124.6mm x 53.4mm x 10.9mm and it weighs in at 91.8g. It has a polycarbonate frame and the rear cover is sandblasted aluminum. Features of the phone include Opera Mini browser, MSN Weather, and Bing Search, and for a year buyers will be able to download a free Gameloft game such as Midnight Pool or Assassin’s Creed Brotherhood each month.

The Nokia 230 Dual SIM might be a suitable first phone or alternatively a good idea for a backup handset when needed. You can see a little more about it in the short YouTube video we’ve positioned below this article. Will you consider this device as a new feature phone purchase? What do you think of the Nokia 230 price?