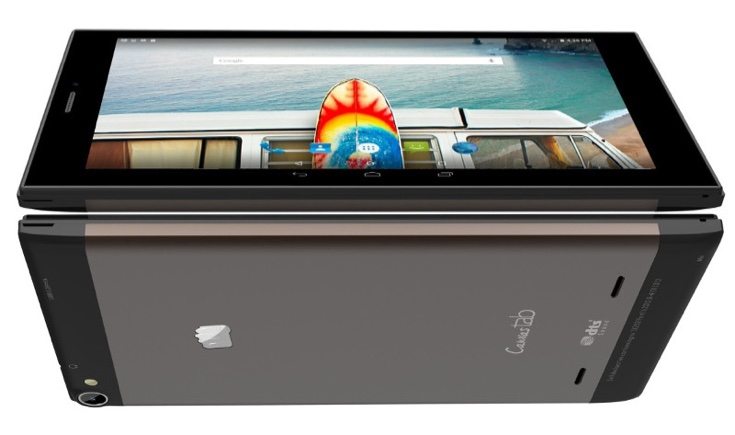 A new Micromax device has just been revealed, and although its size suggests a tablet, it’s officially dubbed a smartphone or should we say phablet. The Micromax Canvas Fantabulet is a Flipkart exclusive and the price has been announced as Rs. 7,499. We have the details of specs and more coming right up.

Specifications of the Micromax Canvas Fantabulet consist of a 1.3GHz MediaTek MT8382W/M quad-core processor, and the IPS display is 6.98-inches in size with HD resolution of 1280 x 720. It has 1GB of RAM, 8GB of internal storage (expandable with microSD card to 32GB), and is juiced by a 3000 mAh battery.

The Micromax Canvas Fantabulet is a dual SIM handset with connectivity covered by 3G HSPA+, WiFi 802.11 b/g/n, Bluetooth 4.0, and GPS. It has an 8-megapixel rear camera with autofocus and LED flash, and a 2-megapixel front-facing unit, and also has FM Radio and a 3.5mm audio jack. Micromax Informations co-founder, Vikas Jain, said of the launch,

We ignited the phablet category with the launch of Canvas range of devices which proved to be extremely popular among the consumers. With the launch of Canvas Fantabulet we are yet again pioneering a new category that will change the way people use smartphones making it their first choice for consumption and productivity needs. The launch comes at the most appropriate time when mobile internet is on the rise and there has been persistent increase in demand for larger screens and video consumption. As pioneers in democratizing technology for the masses, we at Micromax believe the Canvas Fantabulet will be a huge success among big screen lovers and will reinvent the phablet segment.

We’re interested to hear from readers about the Micromax Canvas Fantabulet phablet. What do you think of the Rs. 7,499 price tag of this new Micromax device? Will you considering buying the Fantabulet for yourself from Flipkart?