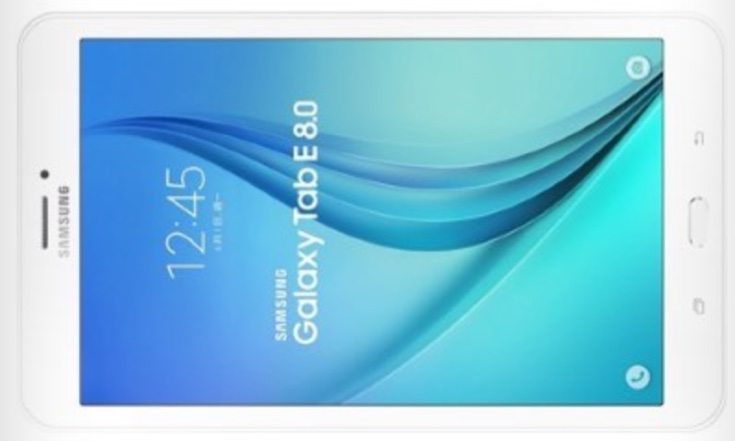 The Samsung Galaxy Tab E 8.0 is expected to release in Taiwan by the end of January. Availability outside Taiwan has not been detailed yet, although it’s likely to release in at least some further markets. The tablet has a polycarbonate build and is similar in styling to the larger Tab E 9.6.

Samsung Galaxy Tab E 8.0 specifications include a 1.3GHz quad-core processor (chipset unspecified but possibly the Snapdragon 410), and an 8-inch display with resolution of 1280 x 800. It has 1.5GB of RAM, and 16GB of internal storage (expandable with microSD card to 128GB), and also comes with free 100GB of OneDrive cloud storage.

Further to this the Galaxy Tab E 8.0 is equipped with a 5-megapixel rear camera (no flash), and a 2-megapixel front-facing snapper. A 5000 mAh battery that should offer over 13 hours of video playback or Internet use supplies the juice. It runs the Android 5.0.1 operating system skinned with Samsung’s TouchWiz UI.

The tablet comes with pre-installed Microsoft Office apps, and online content from certain providers free for a limited time. Connectivity is catered for with 4G LTE, WiFi, Bluetooth 4.1, GPS/A-GLONASS, and microUSB 2.0. A listing for the device confirms it in ‘Classic White’ although a black version is also likely. The tablet weighs in at 360g and measures 212.1mm x 126.1mm x 8.9mm.

Would you be interested in purchasing the Samsung Galaxy Tab E 8.0 if it releases in your region? What are your first impressions of this new Samsung tablet?